Will D.C. grow up in spending battle?

Will D.C. grow up in spending battle?
N&V Staff 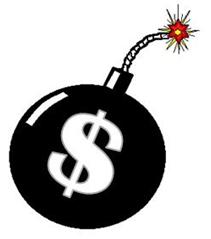 They make tough choices between things they need as opposed to those they simply want when deciding how to spend their paychecks. When beef goes up in price, suddenly more chicken appears on the dinner table. When the cost of gasoline goes up, the next car you purchase ends up being a little smaller in an attempt to cut fuel costs.

Virtually, everyone has had to make these basic economic decisions. For a teen in the 60s or 70s, the choice often was based upon how many returnable bottles were rattling around in your car waiting to be taken to a store for the deposit money, which determined what you could afford to do on a Friday night.

In modern times, adults are constrained by similar paycheck allocation issues along with how much debt they want to accumulate.

Unfortunately, there are those who continue to believe that they can have it all. Bankruptcy courts are filled with people who overextended themselves in the belief that the money tree would never run out.

And many of our elected officials, when it comes to making government spending and taxing decisions, are similarly motivated to pass out goodies to everyone who asks without fear of disaster. But our nation’s current fiscal situation should serve as a wake-up call for those who believe we can continue our current course ad nauseum.

With virtually every dollar having a constituency, reining in this explosion means elected officials will have to become adults, prioritize, and tell some people no.

On the federal government level, the conundrum is daunting. Congress has ceded annual appropriation of so-called “mandatory” spending which accounts for two-thirds of the overall government budget. The other one-third is about equally split between defense and non-defense spending.

On the defense side of the equation, the world has become a much more dangerous place since Sept. 11, 2001, as the on-going threat of Islamist terrorism along with Iran’s hegemonic designs on the Middle East and around the world increase. Iran’s alliances with North Korea and Venezuela make the likelihood of non-contained nuclear proliferation to the world’s most desperate regimes more likely than not posing an existential threat to the United States.

At the same time, the Russians and Chinese are engaged in aggressive war building efforts while testing the waters for expansionist policies. Russia is toying with reestablishing their old Soviet borders through incursions into the Ukraine and threats to the Baltic States and the Republic of Georgia. China, for its part, has dramatically increased the size of its navy and has demonstrated an increasingly aggressive presence from Malaysia to Alaska in the Pacific Ocean.

All of this is occurring at a time when the U.S. Naval fleet is at best aging rapidly under the strain of long-term unrelenting deployment cycles, as well as diminishing in number of active duty ships to the lowest point in almost one hundred years.

With the Cold War peace dividend spent and gone, lawmakers will have to decide how much defense we need, at a time when printing IOU’s to pay for it represents an equally dangerous threat to our national security. Interest payments on the national debt are projected by the U.S. Treasury to hit around $750 billion by 2020 with relatively modest levels of spending growth and a normalization of interest rates. Deficits are expected to continue piling up at about one-half a trillion dollars annually, as federal government outlays are expected to jump by 30 percent by 2020 without meeting the new national defense challenge.

And on the butter side of the federal spending equation, the push for expanded eligibility for social welfare programs continues unabated as states like Republican Governor John Kasich’s Ohio opt to increase the number of people eligible for Medicaid, significantly increasing the rolls of those dependent upon government services. Kasich’s decision alone cost the federal government $4 billion each year.

This is where lawmakers need to put on their adult pants to set and defend our nation’s spending priorities.

The assumption that America will be able to meet our national security needs in the 2020s if we continue down our current course may not be valid. The assumption that we can continue expanding out national debt in half-trillion dollar or more hunks each year indefinitely is certainly not valid. And the assumption that we can continue to expand social services to greater numbers of people out of the goodness of our leader’s hearts is certainly not sustainable without increasing revenues or making other cuts to pay for them is no longer a responsible option.

All of this is without even dealing with the elephant in the room of so-called mandatory spending that consumes two-thirds of the nation’s budget. A problem that will need to wait until America makes a choice for new leadership in the White House.

September is the month for America’s politicians to grow up, set our nation’s priorities and take us off the pathway that leads to fiscal ruin. It isn’t about cutting a deal to keep the government from shutting down, it is about making choices that make out nation safer, and more economically sound.

Seems like this is the very least the people should be able to expect from their elected officials.