Will the last person to leave the newsroom please turn out the lights?

Will the last person to leave the newsroom please turn out the lights?
N&V Staff

(Thomas Mitchell) – This is what a death spiral looks like.

According to Pew Research Center’s annual State of the Media report, newspaper print revenue — advertising and circulation — continues to fall, while digital revenues — advertising and paywalls — are stagnant. 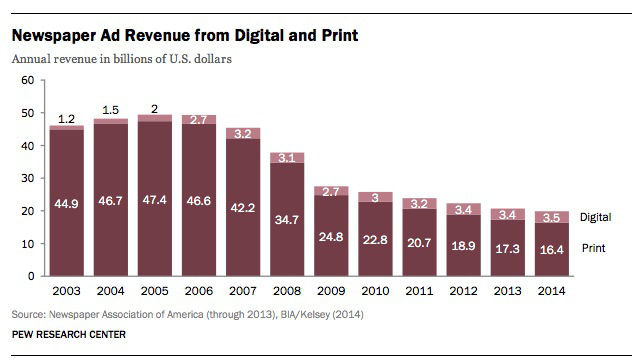 With the advent of the Internet, newspapers began to rapidly lose classified ad revenue due to competition from such things as eBay. To maintain profits, newspapers cut expenses in the form of reporters and copy editors. Content and quality suffered, so circulation fell. This cut revenue from paid subscribers, but also cut ad revenue which is priced according to readership. Thus more cost cutting, leading to … well you get the picture.

Circulation has declined almost every year.

The original version of this column is published on 4thSt8.wordpress.com.