Will the spending pigs squeal this summer?

Will the spending pigs squeal this summer?
N&V Staff

(Rick Manning for NetRightDaily.com) – Summer is here, and in Congress that means it is spending season. The time when appropriators’ eyes turn to buying those extra little frills that make being a Member of Congress such fun. The budget has been set, and now it’s time to spend that nifty $3.8 trillion dollars that has been budgeted for 2016. 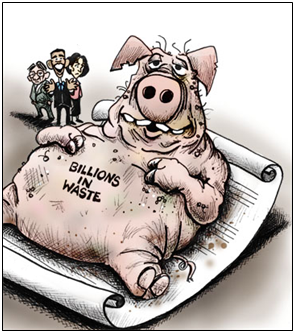 But some House Republicans view the appropriations bills as the time when they earn their pay. It is a time when individual programs, regulations, or initiatives can be singled out and stricken from being funded, a kind of reverse earmark, which stops frivolous and misguided spending.

In 2014, Congress chose to defund President Obama’s attempt to give away the Internet, and that has served as a hurdle that absent the efforts of defunder extraordinaire, Representative Sean Duffy (R-Wis.), would not exist.

Representative Paul Gosar (R-Ariz.) got in on the action last year by pushing a defund of Obama Administration housing regulations that override local zoning of low income housing should a county or city make the mistake of taking community redevelopment grants from the federal government. Unfortunately, while the House passed the Gosar amendment, it was not included in the final funding bill signed by the President.

These surgical strikes can have some small impact on the budget deficit, but they mainly are one of the few viable constitutional alternatives for Congress to follow in wresting policy making authority away from the executive branch’s overzealous regulators.

And the budget challenges facing Congress are only going to increase if economic forecasters are correct.

Goldman Sachs warns that the world is awash in debt, and the United States is one of the worst offenders with our debt to Gross Domestic Product ratio jumping to almost 106 percent.

Andrew Wilson, head of Europe, Middle East and Africa (EMEA), warns that increasing government debt around the world threatens world economic stability saying, “There is too much debt and this represents a risk to economies. Consequently, there is a clear need to generate growth to work that debt off but, as demographics change, new ways of thinking at a policy level are required to do this.”

In the U.S., the situation is even more severe than just the federal government debt death spiral, as the Wall Street Journal reports that fully 60 percent of the debt held by private institutions is federally guaranteed to the tune of just shy of $26 trillion in promises. This doesn’t include the $18 trillion in national debt or the Commerce Department’s estimate that state and local governments owe $2.9 trillion.

With China’s growth faltering, Europe about to go through another round of sovereign debt crises (Greece is first in line with Italy and Portugal not far behind) and Russia, Brazil, and other wannabe economic powers in free fall, the likelihood of private banking institutions tapping the U.S. treasury for at least a portion of that $26 trillion is increasing.

The hope is that low energy prices continue to provide a market-based stimulus to the world’s economy and we can whistle by the graveyard until after Obama leaves office so his regulatory assault on growth and prosperity can be reversed.

In the meantime, Congress faces an immediate opportunity to stop the last eighteen months of Obama’s regulatory mayhem by pinpointing exact programs and initiatives to reduce or eliminate funding, and doing it.

While sharpening the pencil to stop spending on obscure programs being used by Obama to inflict maximum damage to the U.S. free market system may not win many headlines, if Congress moves aggressively on this front, they just might stop this President’s final thrust toward fundamentally transforming America. And in doing so, create a pathway out of the economic morass facing the world as a whole.

Over the next few months, there may be primal screams from those who benefit from the status quo spending scheme. Listen to these complaints as proof that Congress is getting down to the business of cutting out-of-control programs and initiatives. The only thing that should worry people is if they don’t hear any squealing from Washington, D.C., because that means that the only ones being slaughtered are the taxpayers.