With Weekend’s Cyclone, India Crops are Gone with the Wind

With Weekend’s Cyclone, India Crops are Gone with the Wind
N&V Staff 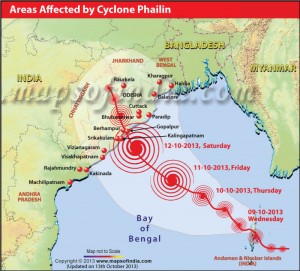 (Chuck Muth) – Cyclone Phailin smashed into India over the weekend with winds in excess of 120 miles an hour, destroying millions of dollars worth of crops, including sugar cane. The Wall Street Journal reports that “crop damage in the region was extensive.”

“Rural roads – where most people sustain themselves by growing rice, bananas, coconuts and other agricultural goods – were flanked by uprooted trees, flattened crops and flooded fields,” according to the Journal.

And while Odisha, the area hardest hit, is not a major sugar producing state, future Asian storms are sure to hit areas where sugar farms will be equally devastated. It’s just a matter of time.

As such, this massive storm should serve as another reminder to U.S. policy makers that it is unwise to risk losing our domestic sugar industry over the promise of cheap foreign sugar that could be wiped away overnight by Mother Nature; a lesson Europeans learned a few years ago after a flood of cheap imported sugar resulted in its own sugar industry all but vanishing.

Indeed, since June of 2012, Congress has voted to change the current sugar policy five times – three times in Senate and now twice in House. It’s hard to imagine any issue, except for ObamaCare, that’s gotten so much floor time over that period.

And each vote has turned out the same; with lawmakers voting to maintain U.S. policy and not unilaterally disarm. The latest one, which occurred Saturday morning – coincidentally as Cyclone Phailin was ripping parts of India to shreds – was the most lopsided of any of them.

Now the Farm Bill heads to conference where sugar policy is unconferencable – which means it’s likely that sugar policy will remain unchanged for the next 5 years.

The widely accepted definition of insanity is to continue doing the same thing over and over. Sugar policy opponents need to adopt a new tact; one that has a chance of success. That’s where zero-for-zero comes into play.

The goal of the zero-for-zero strategy, as outlined by Rep. Ted Yoho in HCR 39, would result in the total elimination of U.S. sugar protections in exchange for simultaneously ending similar government support and subsidies of foreign sugar producers. A win-win for all concerned that would bring about a true, not illusory, worldwide free market.