Gingrich: 75% – The Most Important Number in American Politics

Gingrich: 75% – The Most Important Number in American Politics
NN&V Staff 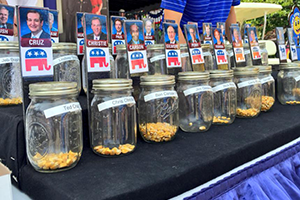 (Newt Gingrich) – This past weekend political shows once again tried to come to grips with the rise of Sanders, Trump, Carson, Fiorina, and Cruz.

The consensus among several commentators was that there is often a flurry of interest in political outsiders during the summer but eventually voters become serious and begin to seek more traditional presidential candidates.

They may be right.

My hunch is they are profoundly wrong.

In a recent Michigan GOP poll, 55%, over half the voters, picked Trump, Fiorina, Carson, and Cruz — three non-officeholders and a Senator known for attacking his own party’s leadership.

This number is stunning, frightening, and will likely lead to huge changes in the next few years.

Literally three out of four Americans, when asked the question by Gallup “is corruption widespread throughout the government in this country or not?” said they believe corruption is widespread.

If you want to understand the Trump-Carson-Fiorina-Cruz appeal, think about that number.

Only 25% of the American people say governmental corruption is not widespread. By comparison, in the Gallup world poll, only 38% of Germans say there is widespread corruption in their government.

Note that Gallup made it a tough question to say yes to. They didn’t ask is there a little bit of corruption. They asked if governmental corruption is widespread.

This pervasive belief in government corruption may help explain why traditional politicians are finding it more difficult to gain traction than they would have expected.

In 2008 and 2012, President Obama promised bold change to the American people. Obama could make a good case that he forced major changes in healthcare, same-sex marriage, and financial reform. Yet on the left there is enormous discontent. Who would have dreamed that seven years into the first African American presidency there would be a “Black Lives Matter” movement expressing rage and frustration? Who would have thought that after six years of blocking the Keystone Pipeline, the environmental movement would be increasingly angry with the former Secretary of State who kept it blocked within her department? From an anti-war activist viewpoint, the Obama Administration has the United States mired down even more than the Bush Administration.

Bernie Sanders is increasingly the recipient of the Left’s desire for a reliable, serious, and committed left wing candidate. He has grown from a nuisance to a very long shot. And, the summer is not yet over.

On the right, there is a very large block who loathe the leadership in Washington. These activists want to fight. They want an all out effort to stop Obama and the Left. They want dramatic efforts to force Washington to change. They cherish the confrontation of shutdowns and despise desperate efforts to avoid fighting the President.

This anger on the right goes back to Pat Buchanan’s primary campaign, Ross Perot’s third party campaign, the tea party movement, and now the Trump phenomenon.

What is making anti-Washington sentiments more powerful is the degree to which independents and moderates are increasingly disgusted with Washington and politics in general.

When 75% of Americans believe governmental corruption is widespread, there is a real appetite for bold and dramatic change.

Suddenly being a Governor or Senator can be interpreted as being part of a system that failed.

Suddenly having a business or medical background is seen as more qualifying than having won public office.

Furthermore, in cleaning up corruption, force of will is more important than position papers or details of policy debates.

People who think there is widespread corruption want someone tough enough and combative enough to root it out.

Trump’s force of personality and willingness to fight makes him a candidate for those who want the crooks out.

Carson’s calm, steady demeanor grows out of a lifetime of very serious, dramatic, life and death decisions in the operating room. While his temperament is the opposite of Trump, his underlying aloofness from traditional politics and disdain for political baloney is very similar to Trump.

Fiorina combines some of Trump’s aggressiveness with some of Carson’s calmness and intellectual toughness. Her years at Hewlett-Packard taught her to be calm, self-possessed, disciplined, and clear.

Cruz is the anomaly. He is a Senator but few think of him as an insider. He is so articulate, bold, and tough on the Washington establishment in both parties that he is clearly an outsider.

Those in Washington who are trying to understand what is happening would do well to look at Gallup’s 75%.

If three out of four Americans really believe governmental corruption is widespread, they will run over the old order and end politics as usual.