Gingrich: The Corruption of American Freedom 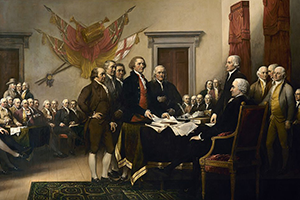 (Newt Gingrich) – This is my third column in a row on corruption.

In the first, I suggested that 75% may be the most important figure in American politics. It is the percentage of Americans who say in the Gallup World Poll that corruption is widespread in government. Given this extraordinary level of contempt for American political and administrative elites, it is no wonder that non-establishment figures like Donald Trump, Ben Carson, and Bernie Sanders are gaining such traction in the presidential nominating contests.

In the second, I compared the American view of widespread governmental corruption with the view in other countries. It turns out that 82 countries have a better view of their government, although many of them not by much. For example, at 74%, Brazilians’ dissatisfaction with corruption in their government has led to nationwide protests. But there are many countries where the view of government corruption is far less: Germany (38%), Canada (44%), Australia (41%), and Denmark (19%).

Today I want to offer some historical context for America’s understanding of corruption.

America’s Founding Fathers had a very precise understanding of corruption. As I describe in my book A Nation Like No Other, the Founders used that word less to describe outright criminal behavior than to refer to political acts that corrupt a constitutional system of checks and balances and corrode representative government. They frequently accused the British Parliament of corruption, citing practices such as the crown’s use of “placemen”—members of Parliament who were also granted royal appointments or lucrative pensions by the crown, in exchange for supporting the king’s agenda.

“When the American Whigs described the English nation and government as eaten away by “corruption,” they were in fact using a technical term of political science, rooted in the writings of classical antiquity, made famous by Machiavelli, developed by the classical republicans of seventeenth-century England, and carried into the eighteenth century by nearly everyone who laid claim to knowing anything about politics. And for England it was a pervasive corruption, not only dissolving the original political principles by which the constitution was balanced, but, more alarming, sapping the very spirit of the people by which the constitution was ultimately sustained.”

The growing sentiment in colonial America was that its mother country was corrupt. Despite the reforms of the Glorious Revolution [of 1688], the crown had still found a way to “corrupt” the supposedly balanced English government. Wood sums it up:

“England, the Americans said over and over again, “once the land of liberty—the school of patriots—the nurse of heroes, has become the land of slavery—the school of parricides and the nurse of tyrants.” By the 1770’s the metaphors describing England’s course were all despairing: the nation was fast streaming toward a cataract, hanging on the edge of a precipice; the brightest lamp of liberty in all the world was dimming. Internal decay was the most common image. A poison had entered the nation and was turning the people and the government into “one mass of corruption.” On the eve of the Revolution the belief that England was “sunk in corruption” and “tottering on the brink of destruction” had become entrenched in the minds of disaffected Englishmen on both sides of the Atlantic.”

If the Gallup World Poll had been around in the early 1770s, one wonders what percentage of colonial Americans would have said they believed there was widespread corruption in government. Whatever the percentage might have been, we know where colonial America’s disgust with British corruption led: a revolution that replaced a monarchy with a Republic.

The American Founders were determined to create a Republican form of government that would pit special interests against each other so that constitutional outcomes would represent the common good. As Weekly Standard writer Jay Cost writes in his new book, A Republic No More: Big Government and the Rise of American Political Corruption, “[p]olitical corruption is incompatible with a republican form of government. A republic strives above all else to govern for the public interest; corruption, on the other hand, occurs when government agents sacrifice the interests of everybody for the sake of a few.”

Cost is so good at describing the problem of corruption that I wish to quote him at length below. Read his explanation and ask yourself whether Cost is describing your views about corruption and government.

“And so we return to one of the earliest metaphors we used to define corruption: it is like cancer or wood rot. It does not stay in one place in the government; it spreads throughout the system. When a faction succeeds in getting what it wants at the expense of the public good, it is only encouraged to push its advantage. By the same token, politicians who aid them and reap rewards for it have an incentive to do it some more, and to improve their methods to maximize their payoffs. Moreover, these successes inspire other politicians and factions to try their hands at raiding the treasury to see if they can do it, too. Thus, a vicious cycle is created that erodes public faith in government, which further contributes to the cycle. When people stop believing that anything can be done to keep the government in line, they stop paying attention carefully or maybe cease participating altogether.

“Ultimately, the public is supposed to be the steward of the government, but how well can it perform that task when it no longer believes doing so is worth its while? How does a democratic government prosper over the long term if the citizenry does not trust the government to represent its interests? How will that not result in anything but the triumph of factionalism over the common good?

“The legitimacy of our government is supposed to derive from the people, and the people alone, who consent to the government because, they believe, it represents their interests. In its ultimate form, corruption eviscerates that sacred notion. The people stop believing that the government represents their interests, and the government in turn begins to operate based upon something other than consent. Put simply, corruption strikes at the heart of our most cherished beliefs and assumptions about republican government. That makes it extremely dangerous to the body politic, regardless of what the Bureau of Economic Analysis says about the rate of GDP growth.”

What Jay Cost describes so well about the erosion of the common good is the underlying explanation of why 75% of Americans say that corruption is widespread in government. It also may explain why voters have elected so many governors recently who had no previous experience in government and why voters are seriously looking at presidential candidates with the same outsider status. Perhaps they hope these outsiders can rid us of corruption by being from outside the system.

Our form of government today allows revolution through the ballot box rather than on the battlefield. But nonetheless, the message for our political elites today is much the same as it was in 1776: they ignore the people’s contempt at their own risk.

The column was originally published on Washington Times.

NN&V StaffNovember 27, 2019
Read More
Scroll for more
Tap
Raising the “Hero Bar”
Do you take your financial advice from the same morons who thought China had a solid economy?
Skip to toolbar