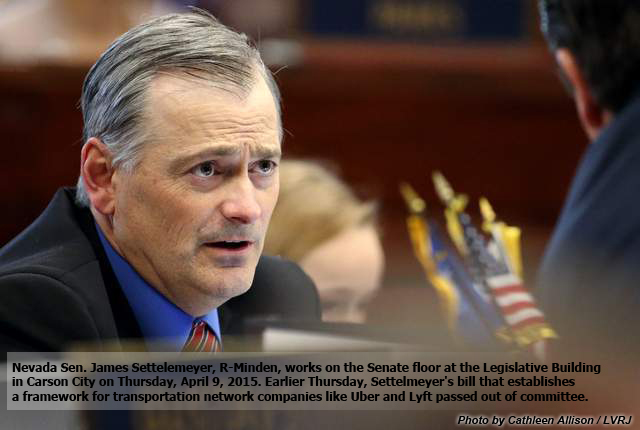 (Sandra Chereb of Las Vegas Review-Journal) – Carson City — The Nevada Senate on Wednesday rejected along party lines a bill to allow ride-sharing companies such as Uber to operate in Nevada after Democrats objected to Republicans blocking proposed amendments.

Senate Bill 439 would have established a framework for ride-sharing technology companies to operate legally in Nevada and be regulated by the Public Utilities Commission.

But the bill also contained a 25-cent-per-ride fee to be deposited into the state highway fund. The fee triggered a requirement for a two-thirds majority vote necessary for passage, or 14 votes in the Senate. The Senate vote was 11-10, with all Democrats voting against it.

State Sen. Aaron Ford, D-Las Vegas, the Senate minority leader, proposed two amendments. One would have required the FBI to conduct background checks on Uber drivers. The other sought PUC authority to curb “dynamic” pricing, where fees for rides increase if demand is high.

Senate Republicans rejected those amendments and refused to hold the bill from a vote to allow more talks, and Democrats dug in their heels.