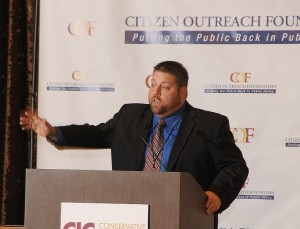 (Las Vegas, NV) – The 2012 Conservative Leadership Conference announced today that Mark Ciavola has been chosen as this year’s recipient of the event’s Nevada Conservative of the Year Award. He is the current chairman of the Nevada College Republicans, while also working on Congressman Joe Heck’s (R-Nevada) re-election campaign.

Mark’s involvement in Nevada politics began in late 2009 when he launched Right Pride, a conservative organization dedicated to spreading the message of limited government, free markets and individual responsibility within the gay community.
From there Mark briefly worked for the Republican National Committee’s Victory Program before being hired to run the volunteer efforts for Dr. Heck’s successful campaign against then-Rep. Dina Titus in 2010.

In 2011, Mark was elected president of the UNLV College Republicans. During his one year term, he grew the organization from 50 members to over 800, raised more than $31,000 and formed the Nevada Federation of College Republicans, which he presently chairs, by re-chartering the chapter at UNR.

Mark was appointed a UNLV student senator in the summer of 2011 and recruited a slate of candidates that took over the Student Senate in last October’s elections – winning 15 of 25 seats. Last month, Mark formed a ticket of conservative students to run for the student government executive board. His ticket won in a landslide, making Mark the new UNLV Student Body President.

“It’s one thing for a conservative to win an election to head up a College Republican organization,” said Chuck Muth, president of Citizen Outreach and co-host of the conference. “But it’s quite another for a conservative to become the head of the entire student body at a major urban university.

“Mark is a doer, not a talker,” Muth continued. “And he understands the necessity of taking the limited-government/liberty message to constituencies and groups outside the traditional conservative movement’s camp. As such the Conservative Leadership Conference is proud to recognize Mark by honoring him as this year’s recipient of our Nevada Conservative of the Year Award.”

The award will be presented to Mark at the annual Awards Luncheon on Saturday, June 9, 2012. For additional information, go to http://www.CLC2012.com