Mourning the Loss of Dennis Hof 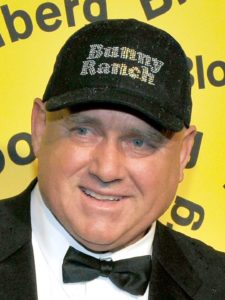 When news of the sudden death of Assembly candidate and brothel owner Dennis Hof reached us last Tuesday, we were quite stunned by it.  We had gotten to know Dennis, and James had seen him several times in the weeks preceding his sudden departure.

One of his great gifts was the ability to make you feel you were the most important person in the room.  Two occasions involving James come to mind, but Ron felt the same way.

A few weeks ago, James and Dennis had lunch along with James’s wife Vicki, her service dog Oreo, and four of Hof’s sex workers.  It was an entertaining lunch, with James and Dennis talking business about how Dennis could help the Knecht campaign in Nye County.  In turn, James talked to Dennis about how to defeat Lyon County Question 1.  That is the advisory question to eliminate brothels in Lyon County.

James later remarked, tongue in cheek, that, “This was the one lunch that I am glad that I had my wife with me.  It would be hard to explain my dining with Dennis and four sex workers otherwise if it got back to her later!”

Vicki talked with the women.  She noted how well educated they were.  They were not women one would typically think of when you think about prostitution.  They were all college educated, well informed and good conversationalists.  Perhaps they were the cream of the crop, chosen by Dennis to represent the brothel.  In any event, they did that well.

As for Oreo?  She adored Dennis and loved the attention from the women.

The second occasion was when James went to address the Nye County Republican Central Committee on Ron’s behalf for the campaign.  The introduction Dennis gave for James was absolutely glowing, leading a few to joke that James must have paid him in advance.

You always knew right where Dennis Hof stood.  He considered Ron to be one of the strongest conservative voices in the state along with treasurer candidate Bob Beers.  And he said so in his glowing introduction of James.

The back story is James took a stand on principle two years ago, and Hof remembered.  James, as the former Republican National Committeeman, took a bold stand by endorsing Hof in his first race for assembly.

At the time, Hof was running as a libertarian against a sitting Republican Assemblyman, James Oscarson, who had lied to Ron and James’s faces only a couple weeks prior to voting on the commerce tax and the largest tax increase in Nevada history.  Oscarson talked to them in his assembly office after a meeting on Ron’s alternative budget that would have required no tax increases, grown spending only slightly, and still provided adequate revenue for important programs.  Oscarson said he would not vote for a tax increase because his constituency in Nye County would vote him out.

Since Oscarson did not keep his word and abandoned Republican principles by voting for the commerce tax and the largest total tax increase in Nevada history, we took this bad faith personally.  Hence, after speaking with Hof and some Nye County friends on the phone, James took a controversial stand by endorsing a Libertarian over an incumbent Republican legislator.

Hof did not win that race, although he did get more than 40 percent of the vote as a Libertarian Party candidate.  After that, at the urging of Republican Party officials in Nye County, Hof changed his voter registration to Republican in order to run against Oscarson in the 2018 primary for the assembly seat.

And James’s endorsement still stood.  Dennis defeated double-crossing James Oscarson in the primary.  Just as Oscarson said to us in his office: Vote for a tax increase, and Nye County votes you out.

Whatever one thought of his business, Dennis Hof always let you know right where you and he stood.  He was larger than life, yet very down to earth.  We’re both better for having known him.

He had integrity and he’ll be missed.