Not So Fast! Judge Halts PLA In NBC Suit (updated) 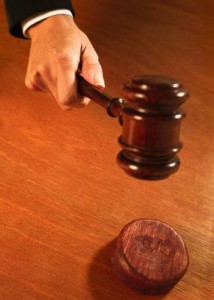 On Tuesday, August 16, the County Commission was scheduled to approve the contract for the PLA on the Detention Center. The item was kept on the agenda although the commissioners took no action other thtan to postpone hearing the item for an additional two weeks. Chair Susan Brager said that the commissioners would discuss what they could do in two weeks but didn’t discuss appealing the case. Deputy DA Neilson reminded the Chair of the option to appeal the ruling. According to the County’s court filings, this rehab is “critical,” and appealing the issue will take longer than just accepting what was decided in court. – Ed.

(Michael Chamberlain/Nevada Business Coalition) – District Court Judge Jerry Wiese granted a preliminary injunction preventing Clark County from moving forward with the Project Labor Agreement on the Clark County Detention Center project. The Nevada Business Coalition and the Associated Builders and Contractors had filed suit to prohibit the County from using the PLA to govern the project.

The decision states that the PLA for this project could not be used as it is not consistent with the portion of Nevada’s competitive bidding statutes requiring public entities to promote fairness and avoid favoritism in the bidding process. Judge Wiese ruled that certain provisions unfairly advantage unions.

Judge Weise reversed his own decision after the Nevada Supreme Court had remanded the case back to him. Although the ruling does not prohibit the County from proceeding with the project under a PLA, major provisions of the current PLA would have to be reformed for it to comply. The objectionable provisions are some of the most beneficial to the unions.

Judge Wiese ruled that the PLA for the Detention Center project violated the requirement to promote fairness and guard against favoritism. He stated the PLA’s condition that non-union contractors may employ no more than seven of their own employees is without basis and requiring non-union companies to hire from the union hall unfairly advantages unions. He also ruled that forcing non-union companies to contribute to union benefit funds, which causes them to pay double benefits, promotes favoritism for union contractors.

Even though the PLA says that unions must not discriminate against non-union workers when sending workers out of the union hall, Judge Wiese ruled that, with the number of union workers who are currently unemployed, it is unlikely that any workers who were not union members would rise to the top of the hiring list and gain employment under this PLA.

Judge Wiese encouraged the two sides to attempt to work out an agreement that would allow the project to proceed. However, objections to the provisions he cited may be the most difficult for unions to overcome simply because they favor unions at the expense of non-union workers and contractors.

The Clark County Commission was scheduled to approve the contract for the Detention Center project with the PLA at its meeting tomorrow. This ruling will change that.