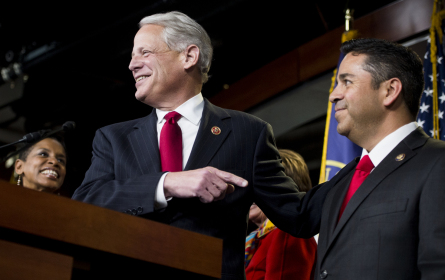 The DCCC, led by Luján, right, and DPCC, led by Israel, are teaming up on an ambitious August project. (Photo by Bill Clark/CQ Roll Call)

The strategy — devised jointly over the past few months by the Democratic Congressional Campaign Committee and Democratic Policy and Communications Committee — is part of an effort to “make the case locally that Republicans and their misguided priorities are failing hardworking Americans across the country,” DCCC Chairman Ben Ray Luján, D-N.M., said in a statement to CQ Roll Call.

The two groups, one focused on politics and other more focused on policy, will essentially lead a good cop/bad cop routine. Democratic lawmakers, playing the good cops, will utilize an August playbook drafted by the DPCC to tout their party’s agenda, while the DCCC will play the role of the bad cop by targeting some of the most vulnerable House Republicans with television ads and full-time staff members in some of their districts.

“In this strategy session, the DCCC and DPCC will lay out our separate but complementary plans for an aggressive August recess, focused on how to best hold Republicans accountable and draw a sharp contrast through 2016,” Luján said of Wednesday’s caucus meeting, which will be held at the DCCC’s headquarters at the Democratic National Committee.