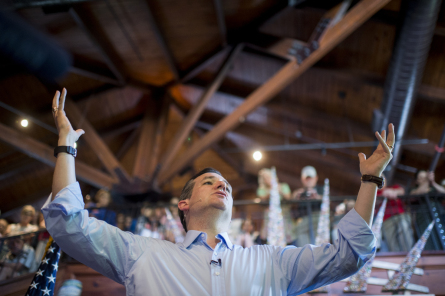 Cruz says he will continue to sing praises for Trump. (Photo by Bill Clark, Roll Call)

(Niels Lesniewski, Roll Call) – Sen. Ted Cruz said next week’s rally outside the Capitol with Donald Trump will get more eyeballs and TV cameras with the fellow Republican presidential candidate in attendance.

“An awful lot of the Republican candidates for president have basically taken out a two-by-four and tried to smack Donald Trump and I have very consciously avoided doing that, and I’ve regularly sung his praises,” the Texas Republican said. “It’s a rally that I’m helping organize to oppose this catastrophic nuclear deal, which I think is the single biggest national security threat facing America.”

“I think his being there will help attract a lot more media attention, will attract more people to come out and join us, and we need to do everything we can to highlight the real problems, the challenges facing this country,” Cruz said, speaking with Boston talk radio host Howie Carr.

The White House went so far as to term the event with Trump and Cruz a “pro-war” rally. Conservative media personality Glenn Beck is also expected to attend, organizers said Monday.