What to Do – and What Not to Do – on Trade Reform 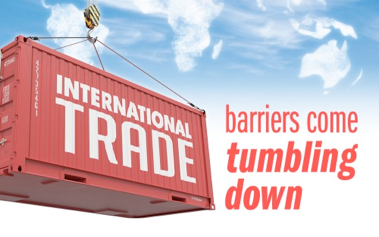 (Seton Motley) – In advance of the 2008 election, now outgoing President Barack Obama ran on “Hope and Change.” It was a smart, cynical ploy. We the People certainly wanted “Change” – but Obama’s “Change” wasn’t even close to what we wanted it to be.

Obama meant “fundamentally transforming the United States of America” – with a massive, omni-directional expansion of government. We the People wanted – dramatically less government. We were tired of watching a (now) $4-trillion-a-year federal government screw up nigh everything it touches – whilst insisting on manhandling everything.

Obama wanted transform – we wanted reform. We still do. How else to explain the presidential election of Donald Trump?

Trump ran repeatedly proclaiming “Our country is being ripped off so badly on trade.” He isn’t wrong. But this has everyone who is #NeverTrump claiming he is anti-free trade.

Nothing could be further from the truth. What Trump wants is what we want: “We don’t want to be the stupid country anymore. We want to be the smart country. We’re going to make great trade deals.”

The trade deals we’ve made – have been stupid: “Trump…is one of the only people (besides…every average American) who acknowledges the very obvious reality of our ridiculously one-sided ‘free trade.’ Who realizes that you can not unilaterally disarm in trade negotiations – or lots of money and jobs pour out of your country. As we have spent the past several decades witnessing here.”

If the United States is the only country de-government-ing international trade – it ain’t free trade. To wit: Brazil, and it’s massive crop market manipulation.

Bad news: Brazil’s government money for crops has been $3 billion per year. The coin for sugar alone has been $2.5 billion per annum – which has artificially allowed Brazil to dominate the global market. Half of the world’s sugar is Brazilian. Worse news: This year, Brazil is bumping its crop bump – to $3.7 billion. An additional 20 percent.

None of this is “free trade.” Nor is it “free trade” if we unilaterally de-government our trade policy – while allowing the likes of Brazil (and China, and…) to continue these sorts of huge market warpings.

What all of this is – is stupid trade. And after decades of its demonstrable failure – it’s time to get smart.

Located in my home state of Virginia is the Thomas Jefferson Institute. They have just released a paean to smart trade policy. It focuses on government sugar policy (you know, the market dominated not by Brazil’s sugar – so much as by its government). But its free trade-free market prescriptions can and should be applied to every commodity traded anywhere on the planet.

As you read the following – simply substitute the word “trade” for “sugar”:

“We zeroed in on the U.S. sugar program and a new concept known as the ‘zero-for-zero sugar policy,’ where America would agree to roll back its sugar subsidies in return for commitments and actions by other countries to do the same. In other words, a subsidy cease-fire so a true free market can form.…

“The ideal goal by the sugar industry here in the United States is a true trade mechanism for all involved. We invited state policy leaders from the sugar producing states and the states that refine sugar to come and talk about this issue and a vast majority of those states joined us: California, Florida, Louisiana, Maryland, Michigan, Minnesota, Montana, Nebraska, Oregon, and Texas attended the briefing and contributed to a lively discussion. We talked about sugar production in our various states. How the sugar producers in many cases also are the refiners. We talked about price fluctuation and how foreign governments subsidize their sugar industry and we do not….

“Based on these discussion and the limited reading I did earlier, TJI explored this issue in greater detail and drafted this report about the best ways to keep farm subsidies and government policies from manipulating the market.”

All of this sounds – nigh exactly like Trump. One-sided “free trade” – ain’t free trade. And it’s incredibly stupid.

All governments, not just ours, reducing their manipulative roles – is smart, actually free trade.

Which is just the kind of “Change” and reform we really, really need.

Seton Motley is the founder and president of Less Government. Please feel free to follow him on Twitter (@SetonMotley) and Facebook. It’s his kind of stalking.

NN&V StaffJanuary 8, 2020
Read More
Scroll for more
Tap
Conservative Reflections on Sandoval’s State of the State Speech
Yoho Zero for Zero sugar policy is a trade win-win for everyone
Skip to toolbar