Why does the left hate entry-level jobs?

Why does the left hate entry-level jobs?
NN&V Staff 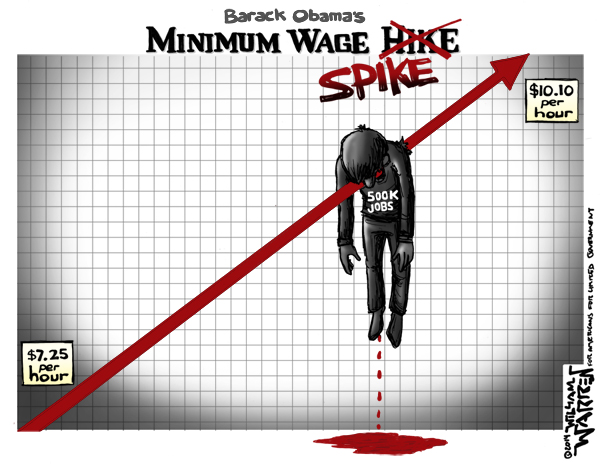 (Rick Manning of Americans for Limited Government) – Why does the left hate entry-level jobs?

That’s what many former fast food workers must be asking themselves after massive increases in the minimum wage in places like Seattle, Washington are being blamed for a wave of restaurant closures. Closures that deprive entry-level workers an opportunity to gain the work skill sets needed for the rest of their lives.

Fully one-third of all Americans in the workforce got their start in the restaurant industry, including this author, who proudly remembers working at Carl’s Jr. in Corona, California for minimum wage while attending Riverside City College.  The discipline to keep a schedule, show up on time, work hard, and pay some bills while living at home has served me well for a lifetime.

When my wife turned sixteen, she got on her bicycle and hit every fast food restaurant in the small Central Valley town of Hanford, California, revisiting stores every week until the local KFC hired her. The money earned helped her afford her first car, pay for her insurance and gas, and attain a measure of independence that allowed her to thrive as an undergraduate at the University of Southern California. At USC, she worked her way through school waiting tables at the local diner while carrying a full academic load.

Unfortunately, the self-serving, left-wing, professional troublemakers and their labor union financiers seem bent on destroying these vital experiences for life success for the next generation of America’s workforce.

For evidence of the devastation caused by demands for wages that are not justified based upon the cost the public is willing to pay for their products, one only has to go to the local grocery store. Not too long ago, that store had retail clerks and baggers lined up to help check out customers in a friendly and efficient way. Now, largely due to labor costs, many checkout stands require the customer to scan themselves out, with the embarrassment of having to let everyone know that you can’t figure out which type of apple you are buying to the satisfaction of Siri’s wicked cousin in the machine who loudly demands that you scan the item again.

Where pimply-faced, sixteen-year-old kids used to eagerly bag your groceries and even offer to help you out to your car, the customer now has to fumble around bagging their own, in the bag they brought, creating a strange wistfulness for the good ol’ days of the 2000s.

Fast food and entry-level job juggernaut McDonald’s is shuttering 700 stores due to poor profitability, a problem that would be exacerbated by an increased minimum wage and unionization. If each of these stores employs just forty people, these closures amount to job losses for 28,000 people, most of whom are entry-level workers or people learning business management skills. The exact kind of do-gooder collateral damage that has become the hallmark of drive-by liberals who stir up trouble and when they succeed, move to the next town, leaving those they left behind to bear the costs.

At a time when the Bureau of Labor Statistics reports that the unemployment rate for those aged 16-19 is more than three times the rate for the population as a whole, America needs to tell those who clamor for a so-called “living wage” thanks, but no thanks. After all, it is better to have a wage, rather than none at all. And it is definitely better for young adults to have the hope of getting a job, rather than the embarrassment of knowing that they are going to have to ask Mom or Dad for cash to take their girlfriend to the movies.

So why do leftists hate entry-level workers? Perhaps it is because when young people work, earn a wage, and are able to take care of some of their own bills, they increasingly become independent and self-sufficient, the exact type of citizen who frees himself from the chains of the dependency state in which progressives thrive.

The simple freedom of cashing your first paycheck and having money in your pocket that is yours to spend is one of the first steps to economic adulthood. Let’s hope the quests for unionization of entry-level employees and for forced minimum wage increases don’t deny our kids this vital learning experience.

The author is President of Americans for Limited Government and is a former Public Affairs Chief of Staff at the U.S. Department of Labor.