A Conservative, a Libertarian and a RINO walk into a brothel…

A Conservative, a Libertarian and a RINO walk into a brothel…
N&V Staff 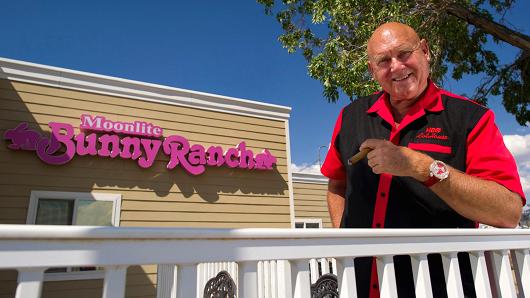 (Chuck Muth) – So, liberal Republican state Sen. Greg Brower, District 15 in Reno, has decided to quit the Legislature rather than face voters next November after voting for the largest tax hike in Nevada’s history, single-handedly killing the campus-carry bill, and a bundle of other anti-conservative transgressions too numerous to list here.

The Republican establishment has anointed Heidi Gansert as Brower’s replacement.

Gansert is a government employee with a “juice” job at UNR and was liberal Gov. Brian Sandoval’s first chief-of-stuff.

She’s also a former Assembly minority leader whose conservative principles were solidly grounded in…pudding, and who earned a reputation for going-along-to-get-along.

She is, in the modern vernacular, a RINO – “Republican in Name Only.”

Gansert is being challenged in the GOP primary by businessman Eugene Hoover, a candidate whose conservative street cred is beyond doubt but whose campaign thus far has been pretty much invisible.

Which is, nevertheless, a step ahead of the Democrats – who have no identified candidate for this race at all yet.

Hof owns a half-dozen legal brothels in Nevada and is a live-and-let-live kinda guy who’s announced he’s running for this seat in the general election as a Libertarian.

Which caused cowboy conservative Assemblyman Jim Wheeler to have a cow, and a bit of a conniption.

After Hof’s announcement, Wheeler took to Facebook to decry his entry, arguing that Hof and Gansert would split the GOP vote and the non-existent, at the time of this writing, Democrat will “walk in.”

Wheeler went on to criticize conservatives for being willing to vote for Hof and sacrifice the seat for the GOP simply to make a “statement.”

Which elicited strong rebukes from some strong conservatives.

For example, Jim DeGraffenreid wrote that if Democrats regain the majority, currently split 11-10 in favor of the GOP, they “will advance a liberal agenda just as the GOP majority did, but they’ll do it without the collateral damage of destroying the GOP brand in the process.”

Hard to argue with that.

Bill Carns – Chairman of the Nye County Republican Party and never a shrinking violet – actually sees a path to victory for Hof…and can certainly live with it.

“He’d be better than that turncoat horse’s ass, Brower,” Carns wrote in typical undiluted clarity.  “Then again, even a cannibalistic rat would be better than a number of RINO scum in the Nevada Senate.”

Subtle he ain’t, but right he is.  Though I’d understand if scum were offended by the comparison.

Conservative Tony Shelton, spouse of conservative Assemblywoman Shelly Shelton, added that the Republican majority in the Nevada Legislature has “done WORSE than what a session of Democrats next session could do.”

The tax-hiking liberal Republicans “have destroyed the trust” with voters, Shelton argued, writing that the only way to get it back was to defeat such Republicans in Republican primaries – just as Wheeler himself did four years ago.

Wheeler, a fairly strong conservative before ending up in Assembly Republican Caucus “leadership” in the last session, has gone native.

He rebuked Shelton, maintaining he, himself, “was hired to fix problems” and that “fixing the problems takes more than standing back and bitching.”

And conservatives aren’t supposed to, for example, vote to expand government and jack up the cost of a government-mandated hunting licenses to “fix the problem” of elk running through Farmer Brown’s cabbage patch.

(Yes, Assemblyman Wheeler did just that.  And he can fully rationalize it.)

When conservatives get elected to office, they all eventually come to a fork in the road.

At that point they have to decide whether to join the collective and go along to get along for the self-righteous purpose of “fixing problems,” or stand by their professed conservative principles and fight to get more conservatives elected rather than be assimilated by the GOP “Borg.”

It’s sad and disappointing when a once-reliable conservative like Assemblyman Wheeler goes the wrong way.

But the power of the Dark Side is strong.  And not all conservatives are strong enough to resist.  After all, those shrimp balls over at the governor’s mansion are yum, yum, YUMMY!

That said, for many of us who haven’t given up or given in, if the choice is between Hof and Heidi, we’ll take the brothel owner any day ending in “y.”

And if that means the worthless, gutless, liberal, tax-hiking, government-growing GOP “scum” lose their majority…