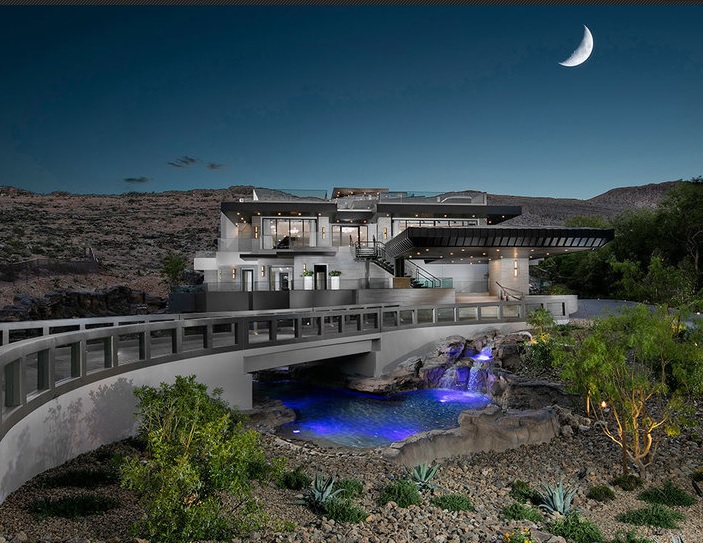 The exterior of the home, which is a total of 23,748 square feet. (Courtesy: Shay Velich, Mansion Global)

(V.L. Hendrickson, Mansion Global) – From the basketball court with his-and-her bathrooms to the 360-degree views from the glass-walled office, this Las Vegas house is the stuff of fantasy.

But the six-level home, dubbed SkySide, does exist, tucked away in the hillside at the Pointe at the Ridges, an exclusive Las Vegas community. “It just jumps out” as you turn a corner on the hillside drive, said Mr. Sher. “It’s a piece of art.”

The entire home has a modern look and a no-expense-spared feel. The limestone floors of the entryway lead to the piano room and then to the great room. An outdoor pool surrounds the entire living area, with floor-to-ceiling windows that slide open to the water and views beyond. A separate entertainment space beyond the formal living area features a lounge and sunken bar, which can serve as a stop for thirsty swimmers in the pool outside.

There are several bedroom suites, but the three-level master suite was designed as a “retreat-like penthouse,” Mr. Sher said. A living room, with a kitchen, takes up the first floor, and the bedroom is on the second level, offering “second to none” views of the world-famous Las Vegas Strip.

The third floor is the glass-walled office, which also has views of the Strip, as well as the mountains of the Red Rock Canyon National Conservation Area behind it. A wraparound patio surrounds the suite.

This five-bedroom, 13-bathroom home has a total of 23,748 square feet on just over an acre of land.

The views continue on the 4,888-square-foot rooftop patio, which has its own kitchen, multiple grills, overhead climate control, a hot tub and several fire pits. There’s a pop-up movie projector and full sound system on the teak-covered patio (in addition to an indoor home theater). The home has a total of 10,474 square feet of outdoor space.

The kitchen is decked out in all stainless steel appliances, with custom cabinetry from Artesia Las Vegas, and Lumix quartzite countertops. There’s also a second kitchen, perfect for catering large events.

SkySide has a two-floor basement, which is where to find the half-basketball court, as well as a fitness center, salon and massage area. The lower levels also house a bar and wine cellar, a sound-proof space for a music studio, separate maid’s quarters and an air-conditioned dog run.

Not one, but three commercial elevators serve different parts of the building, which also features a 2,400-square-foot, eight-car garage.

Completed at the beginning of 2016, the builders, Sunwest Custom Homes, spared no expense. The doors have a piano finish, and the chrome hardware is meant to mimic jewelry. Custom tile work by Ann Sacks, white Thassos marble throughout and Ochre chandeliers are just some of the home’s other details. There’s also millions of dollars in furniture and interior design, said Mr. Sher. The furniture, he said, is available at an additional cost.

The Pointe at The Ridges is part of the community of Summerlin, and each has its own gate for maximum security. The home not only overlooks the strip and Red Rock Conservation Area, but also the Red Rock Country Club golf course.