A majority says ‘move on’ from protesting Trump

A majority says ‘move on’ from protesting Trump
N&V Staff

(Victoria Balara, Fox News) – Thousands of protesters have taken to the streets since Donald Trump won the presidential election.

But a majority of voters would tell protesters:  “it’s time to move on.”  That’s according to a Fox News Poll of registered voters released Thursday.

The poll asks, “What message would you like to send to people who are protesting President Trump and his policies?”  Over half, 53 percent, would tell them “it’s time to move on,” while 44 percent would implore them “don’t give up the fight.”

Not surprisingly, these results are highly partisan.  Fully 81 percent of Democrats want the protesters to keep fighting, while even more Republicans (87 percent) say it’s time to move on.

Some of the most widely publicized protests center on women, who voted for Hillary Clinton over Trump by a 13-point margin (54-41 percent), according to the Fox News exit poll.  Those rallies include the Women’s March the day after President Trump was inaugurated and next Wednesday’s, “A Day Without A Woman” strike. 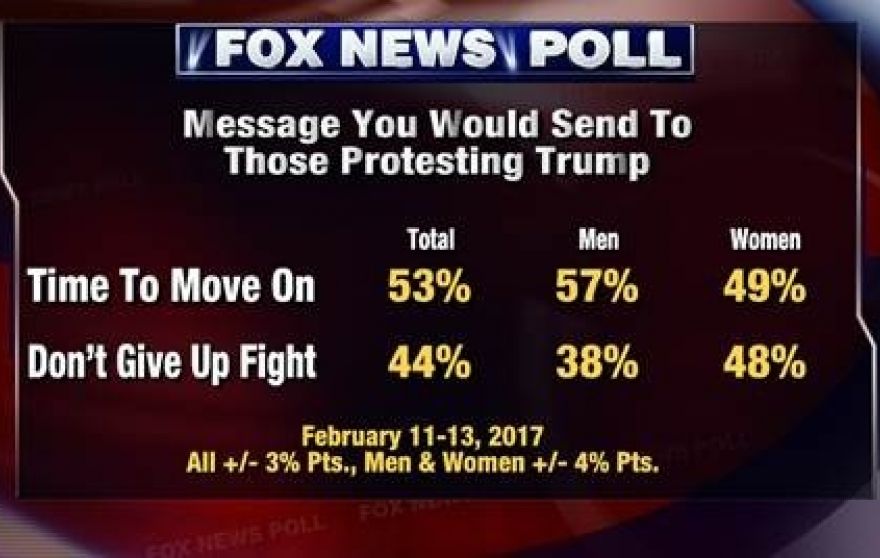