Adelson: Republicans should back Trump 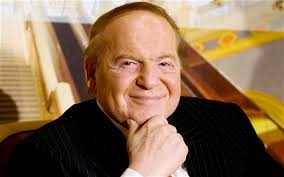 (Sheldon G. Adelson) – At the outset of the 2016 election, the GOP primary field was nearly as large as that of this month’s Kentucky Derby. In total, 17 Republican hopefuls campaigned to win the party’s nomination for president.

Like the Derby, the race for the Republican nomination started from a wide gate — some entries with better post positions, others with more backing.

We had candidates with such perceived advantages as wide name identification, large campaign war chests, supposed geographic benefits and other assets they hoped would tip the race in their direction.

Ultimately, each candidate had to convince the party’s primary voters across the country that he or she deserved to be the nominee.

One candidate has won that race, and now Republicans must join together to make sure he wins the next one.

While the primary cycle still has some important elections ahead, it is clear that Donald Trump will be the Republican nominee for president.

I am endorsing Trump’s bid for president and strongly encourage my fellow Republicans — especially our Republican elected officials, party loyalists and operatives, and those who provide important financial backing — to do the same.

The alternative to Trump being sworn in as the nation’s 45th president is frightening.

For nearly eight years, Republicans have fought tooth and nail against President Obama and his policies. We waged battles over debt, government spending, Obamacare and the Iran nuclear deal — an issue of paramount importance to me personally and to many others around the world.

We gained some victories, but on too many issues Obama achieved his goals, if not necessarily America’s goals.

As Republicans, we know that getting a person in the White House with an “R” behind his name is the only way things will get better.

That opportunity still exists. We must not cut off our noses to spite our faces.

If Republicans do not come together in support of Trump, Obama will essentially be granted something the Constitution does not allow — a third term in the name of Hillary Clinton.

I’ve spent time talking to Donald Trump. Do I agree with him on every issue? No. But it’s unlikely that any American agrees with his or her preferred candidate on every issue.

After the 2012 election cycle, I was asked frequently what I would look for in a future presidential contender.

While I had some personal preferences because of friendships with some of the 2016 candidates, I kept coming back to the issue of executive experience.

In my view, a governor of a state is ideally qualified to be president. A governor is a state’s final decision maker — its chief executive and steward of the public’s money.

I felt strongly that someone with that level of CEO experience would be well-trained for the job of president.

It turns out that is exactly what we are getting in Trump. He is a candidate with actual CEO experience, shaped and molded by the commitment and risk of his own money rather than the public’s. He is a CEO success story that exemplifies the American spirit of determination, commitment to cause and business stewardship.

Despite being the grandson of a Welsh coal miner and the son of a Boston cab driver, I’ve had the remarkable experience of being part of almost 50 different businesses in my more than 70-year business career.

So, tell me I’m not a conservative enough Republican or I’m too hawkish on Israel or whatever else you may think, but I think I’ve earned the right to talk about success and leadership.

You may not like Trump’s style or what he says on Twitter, but this country needs strong executive leadership more today than at almost any point in its history.

The world is less secure than ever, and our allies have lost confidence in our ability to lead. The economy is not growing the way it should. The middle class is finding it harder and harder to get by.

Trump has created a movement in this country that cannot be denied. He will end this primary election cycle having garnered more Republican primary votes for president than anyone before.

But some Republicans are sitting on the sidelines, threatening to stay home on Election Day or, worse, suggesting they will vote for Clinton. They must realize the stakes are too high for an outcome that will have a damaging impact on our country.

Republicans have the candidate who the people decided is our winner from a field of 17 viable contenders. It’s time for all Republicans to mount up and back our nominee.

Sheldon G. Adelson is chairman and chief executive of Las Vegas Sands Corp., and a member of the family that owns the Review-Journal.  This column was originally published in the Washington Post of May 21, 2016.