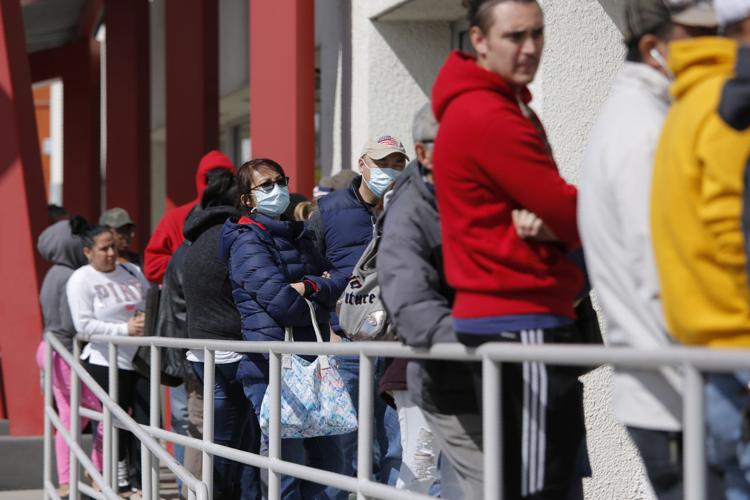 In this March 17, 2020, file photo, people wait in line for help with unemployment benefits at the One-Stop Career Center in Las Vegas.
John Locher / AP

Nearly 4 million workers filed new jobless claims in the week ending April 25, adding up to a total of 30 million new jobless claims since the onset of the pandemic. Severe levels of joblessness signify the economic pain American households are experiencing, and concentrated joblessness creates an economic risk for state and local finances.

The pandemic recession will test the solvency of households, businesses and governments. Many entities that entered the recession with weak finances will be forced into a financial restructuring, as already has occurred with some businesses, such as national retailer J. Crew. 50 Economy’s real-time unemployment tracker provides a metric showing how households, businesses and governments are holding up across the states. A high jobless rate shows where households are hit hardest, where local businesses are struggling most, and where governments will see the biggest revenue shortfalls.

50 Economy’s estimates are current through April 25, when the national jobless rate was nearly 24 percent. South Dakota has the lowest state rate at 10.5 percent. Utah, Wyoming and Nebraska are the only other states below 15 percent. Eight states have jobless rates over 30 percent. Kentucky has the highest rate at 35.6 percent, followed by Hawaii (31.7 percent), Georgia (31.2 percent), Nevada (31 percent) and Pennsylvania (31 percent). 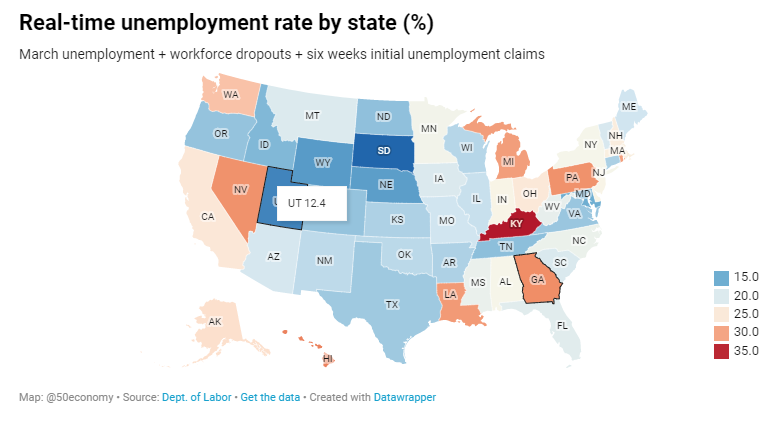 Moody’s Analytics conducted a stress test of state finances in October 2019, providing a timely picture of state preparedness for a recession. The worst fiscal shortfalls are expected to be in Louisiana (19.9 percent), Illinois (15.8 percent), Kentucky (14.6 percent), Oklahoma (14.6 percent) and New Jersey (13.9 percent) under a “severe recession” scenario.

Kentucky has the nation’s highest real-time unemployment rate and a severely underfunded pension system. Louisiana’s unemployment rate also is above 30 percent, and its economy is leveraged to the energy sector, which is in shambles. Both these states face acute near-term fiscal challenges.

Illinois and New Jersey don’t have the same sky-high unemployment rates afflicting Kentucky and Louisiana, but their finances are crippled by legacy pension debts that already were consuming their government finances before the pandemic crisis. Watch for these two states to face a grinding fiscal crisis and slow recovery if they don’t reform their pension liabilities.

Real-time unemployment rates indicate a short-term economic exposure to the pandemic rather than a long-term economic trend. However, a spiking unemployment rate can accelerate and exacerbate a long-term trend. For example, states with high taxes and legacy pension debts will buckle under the weight of a sudden economic stop, and they will face a long, grinding recovery during which their competitiveness will decline. In contrast, states with fewer legacy problems will produce a more competitive recovery and will attract taxpayers from states that suffer under poor fiscal management.

States must cut discretionary costs, prioritize spending for future growth rather than legacy costs, and bolster their tax and regulatory policies for a rapid recovery. When millions of Americans pour back into the labor force, they need to be able to pursue their goals in a dynamic and growing economy. State and local public policy reforms can create a landscape for a robust economic recovery by making it easier to reabsorb laid-off workers, hire additional workers, and start and grow new businesses.

Michael Lucci is the President and publisher of 50economy.org. He also serves as a Senior Policy Advisor to the State Policy Network. He previously was the Vice President of State Projects for the Tax Foundation, based in Washington D.C. Prior to that he served as Illinois Governor Bruce Rauner’s Deputy Chief of Staff for Policy. He began his policy career at Illinois Policy Institute, where he was a Vice President of Policy.
Prev postNext post
Print
Related Items
Featured Article
The Center Square
Related Items