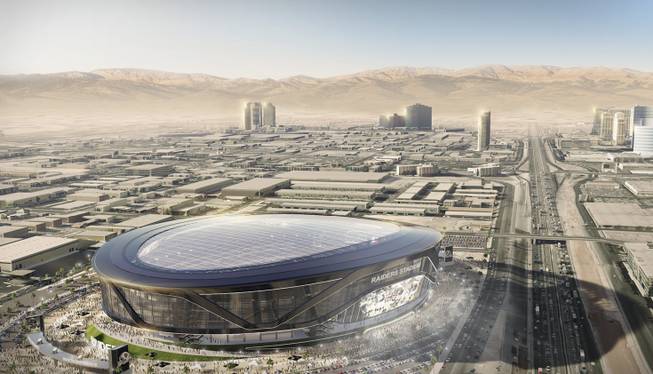 Over the years, developers have proposed building a slew of eye-catching, if not improbable, stadiums. (Remember the complex pitched for land near the M Resort in Henderson? Or the UNLV Now project?)

Most ideas fizzled before any serious conversations occurred regarding their construction. That changed this year when the Las Vegas Sands Corp. and Majestic Realty Co. unveiled plans to build a 65,000-seat stadium near the resort corridor and lure the Oakland Raiders here. Football fans rejoiced, long public meetings ensued and both taxpayers and politicians have kept close tabs on the unfolding situation, which seems to be marching toward reality.

The stadium sites have been narrowed down to two locations — acreage west of Interstate 15 near Russell Road or on land now occupied by the Bali Hai golf course.

A group charged with vetting tourism-related projects has been busy hashing out the details with developers. Ultimately, the Southern Nevada Tourism Infrastructure Committee will issue a recommendation to the governor, which could set the stage for a special legislative session to approve a stadium deal.

Don’t go buy your Raiders gear yet. There are many loose ends to tie up, and questions to answer.

So how did we get to this point — and what’s next?

An NFL stadium — originally not even on the committee’s radar — quickly became a key focus, buoyed by media hype when the Las Vegas Sands Corp. and Majestic Realty Co. presented their plans early this year. Sands CEO Sheldon Adelson’s quest to build a stadium and bring the Oakland Raiders here garnered national attention, especially when soccer star David Beckham dropped by a committee meeting and pledged his support.

Since then, the infrastructure committee — made up of elected officials and representatives from gaming companies, UNLV and the state — has been vetting the developers’ proposal, which involves public and private investments.