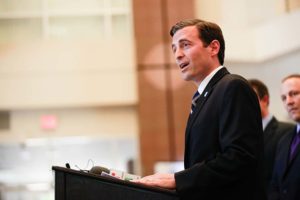 Nevada Attorney General Adam Paul Laxalt announced that Lynn Benson, 54, formerly of Las Vegas, was indicted by a Clark County grand jury following her arrest in May by the Cloverdale, CA Police Department. The charges include five counts of Mortgage Lending Fraud, a category “C” felony, one count of Pattern of Mortgage Lending Fraud, and five counts of Theft in the Amount of $3,500 or More, both category “B” felonies.

According to the indictment, Lynn Benson misled victims into believing their homes could be saved from mortgage foreclosure. The victims were led to believe that they could follow a devised scheme devised to not make additional payments on their homes.

“Taking advantage of homeowners in need of assistance will not be tolerated by my office,” said Laxalt. “We will continue to work with our law enforcement partners to protect the financial safety of all Nevadans.”

A grand jury indictment is merely a charging document; every defendant is presumed innocent until and unless proven guilty in a court of law.

The grand jury indictment against Lynn Benson is attached. To file a complaint about someone suspected of committing a fraud, click here.