If Republicans want to win, they’ll have to stop governing like Democrats

If Republicans want to win, they’ll have to stop governing like Democrats
N&V Staff 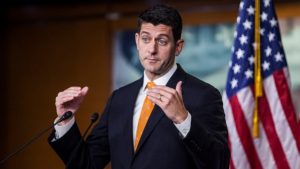 The liberal media keeps beating the drums that President Trump could cost Republicans their majorities in Congress.

Not so fast. The Club for Growth PAC’s experience in running dozens of races in Republican primaries this year reveals the real problem. Republicans are in trouble because their own base is rejecting moderates who failed to uphold their promises to help President Trump roll back big government.

We heard the same predictions in 2016 — Republicans would lose the Senate because Trump was at the top of the ticket. Instead, they kept control of the Senate and won 13 out of 18 toss-up House districts. These include the open seat in New York’s 19th Congressional District where Republican John Faso handily beat Zephyr Teachout by nine points. In several House districts, Republicans won even where Hillary Clinton won.

How did they do it?

They ran on a fiscally conservative platform that wooed many former Obama voters who were sick and tired of the waste, excess, and regulation of Obama’s reign. Some of these districts switched from Obama districts to Trump districts for the same reason.

But with the 2018 midterms less than three months away, the pundits predict that “Republicans will lose 40 to 50 House seats.” Almost all of these seats are represented by moderates who have dragged their feet on implementing President Trump’s mandates. Their average on the Club for Growth Scorecard on economic issues is a mere 64 percent — basically a D+ at best.

Over the past two years, so-called moderate congressional Republicans abandoned their conservative campaign promises and sided with Democrats. From repealing ObamaCare, to passing a $1.3 trillion omnibus spending bill that ensures perennial $1 trillion deficits, these Republicans forced the Republican-controlled Congress to break many of its core campaign promises.

John Faso, for example, ran as a frugal fiscal conservative in his open-seat race, promising to “fight to lower taxes to help create jobs.” In another ad, Faso’s economic plan included core conservative principles like, “Simplify the tax code” and “end corporate welfare.”

After being sworn into Congress, however, John Faso the congressman didn’t look anything like John Faso the candidate. Instead of cutting taxes and simplifying the tax code, Faso voted against President Trump’s signature tax cuts (RC #699, 2017). Instead of living up to his self-proclaimed frugality, Rep. Faso couldn’t muster the frugality to support a mere one percent spending cut (RC #251, 2018). And instead of cutting corporate welfare, he supported wasteful sugar subsidies (RC #193, 2018).

New York’s 19th district is a lean-Republican seat (R+2 on the Cook Partisan Voting Index) that handed Trump a six-point victory, but Faso is voting like a Democrat on fiscal issues. In 2017, Rep. Faso earned a meager 24 percent on the Club for Growth’s scorecard — the worst Republican score in the House of Representatives.

Republicans like Rep. Faso have a problem on their hands: The GOP is treating voters as if they’re stupid — but they are not. Voters are smart. They know what candidate Faso promised: to change Washington. And they know what he did: jump on the DC swamp bandwagon. When candidates tell voters they’re going to cut taxes, rein in spending and fight corporate welfare, voters actually expect them to follow through. And when politicians break their promises, they lose all credibility with the voters who sent them to Washington in the first place.

Similarly, take a look at the special election in Ohio’s 12th congressional district, where moderate Republican Troy Balderson who supported funding Medicaid expansion barely eked out a victory over Democrat Danny O’Connor. The moderate Balderson narrowly won a contested Republican primary against a more conservative opponent with the help of establishment funding.

But this special general election race never should have been this close. The 12th district has an R+7 Cook Partisan Voting Index rating and was easily held by Republicans for 30-plus years. The last three Republican presidential candidates easily won the district: Trump: 53.7 percent to 41.9 percent; Romney: 54.4 percent to 43.9 percent; McCain: 53.7 percent to 44.8 percent. Liberal pundits have speculated that this is the “Trump” effect. More important is voter disgust with conventional politicians. Republican and independent voters are sending a message — they are rejecting establishment orthodoxy — that it is not OK to run as a conservative and govern as a moderate.

Republicans are once again in danger of losing the majority. All but a few of the at-risk seats are held by moderate members who campaigned as small government conservatives and then voted along with big government liberals.

Time and again, Republicans have failed to learn this important lesson. If Republicans want to hang onto their House majority, the single most important thing they can do is start acting like conservatives.

It’s time for Republicans to learn this lesson before it’s too late.

David McIntosh, a former Indiana congressman, is president of the Club for Growth, an advocacy group that focuses on pressuring lawmakers to vote like free-market, limited government conservatives.

N&V StaffSeptember 12, 2022
Read More
Scroll for more
Tap
Security Clearances: When Should they be Revoked?
All About Stan: A Winning Platform in an Losing District