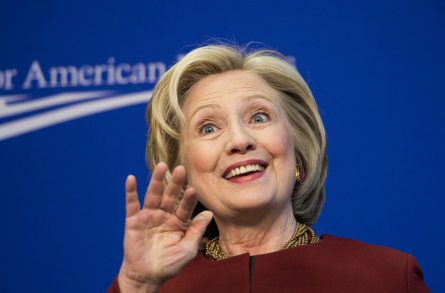 UNITED STATES – MARCH 23: Former Secretary of State Hillary Clinton speaks during the discussion on “our nation’s urban centers” at the Center for American Progress in Washington on Monday, March 23, 2015. (Photo By Bill Clark/CQ Roll Call)

(Steven Dennis of Roll Call) – You knew it was coming: The White House is starting to get a case of Clintonitis.

With Hillary Rodham Clinton the overwhelming favorite to carry the Democratic torch next year — and now an official candidate starting to spout policy positions — the White House has been forced to parry an ever-increasing barrage of questions.

Speaker John A. Boehner got the ball rolling by asking President Barack Obama to enlist Clinton’s help to pass fast-track trade authority. That had White House Press Secretary Josh Earnest retaliating, suggesting such a move would signal desperation from the GOP.

“It seems a little early for a pretty desperate act like that, to basically suggest that you need a candidate for office from the other party to help you advance the agenda when you’ve got the majority in the House of Representatives,” Earnest said.

He later had to use all the rhetorical tools in his arsenal to avoid commenting on Clinton’s push to set up a deferred action process for the parents of “DREAMers,” who brought their children to the United States illegally years ago, so they can avoid deportation.