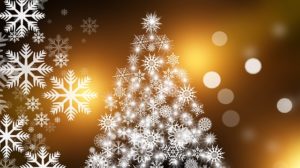 As we approach the holiday season and Christmas draws nigh, let us share with you some Christmas memories.

Both Ron and James grew up in the same area of the country, albeit at different times.  Ron grew up in the 1950s and 1960s in a small town in Illinois across the Mississippi River from St. Louis.  James grew up during the 1970s in a suburban area of the city on the Missouri side of the river.  James’s mother even attended the high school that was the arch-rival to Ron’s in his sports, cross-country and track.

James recalls Christmas trees from floor to ceiling in the vaulted-ceiling living room, and lights being strung by his father all over the 1930s English Tudor-style home where he grew up.  It was a time of family and friends, the “two Christmas dinners” with a Christmas Eve meal at his paternal grandmother’s home, and Christmas dinner at the home of his maternal grandparents.  All including aunts, uncles, cousins, and even great grandparents.

Of course, all this came after Santa left presents for James and his sister on Christmas morning at their home.  And plenty of Christmas music was abound to help set the festive mood.

There was even a supernatural aspect to Christmas in James’s house once upon a time.  Although he doesn’t recall the entire event due to his young age, apparently he woke up everyone in the house sometime in the middle of one Christmas night screaming that he saw someone, a ghost perhaps, putting something down the laundry chute prior to vanishing into thin air.

Talk about the “Christmas spirit”!

Although James’s family moved from the St. Louis area in the mid-70s, most years his parents, sister and he would return to the St. Louis area during the holiday season to celebrate with family and friends.  Some of his best memories are of the Christmas time period and the time spent with family.

It was always considered home when James was growing up, and both he and Ron still have family who reside in the area.

The Knecht family always gave the main gifts on Christmas Eve and the children’s stockings were filled when they awoke Christmas morning.

Ron recalls getting a double-holster gun belt, two cap pistols and a cowboy hat when he was seven.  His uncle was churlish enough to play quick draw with the kid and beat him every time.

About three years later, Ron and his brother Tom, a year younger, got matching red bicycles, which they later painted green.  Another year, Ron got a transistor radio the size of a cigarette pack, which he proudly stuffed into his shirt pocket.  For a lower middle class family at the time, the bicycles and radio were so expensive that the boys got no other significant presents.  But they were quite happy nonetheless and there was always lots of Christmas music and family.

As time goes on, Ron remembers most fondly what his sainted mother put in their large red stockings each year.  There was always a large juicy thick-rind orange and a succulent apple.  Plus, lots of nuts in the shell: almonds, pecans, filberts (hazelnuts), peanuts and walnuts.  Also, a candy cane and chocolates, especially chocolate-covered cherries.  Maybe a few other things.

Besides loving the chocolate-covered cherries, Ron was torn between the nuts and the large oranges as his favorite items.  He especially liked using the nutcracker to open the nut shells and get the fresh nut meats.

But in the 1975 movie Nashville, there was a scene that touched his soul.  Howard K. Smith plays himself, a TV commentator analyzing the candidacy of Replacement Party Presidential candidate Hal Phillip Walker.  Smith notes how the campaign started with Walker energizing a group of college students with some odd questions, including: “Does the smell of oranges remind you of Christmas morning?”

Now, when Ron opens a large orange with a thick rind and juicy segments, he is taken back to mid-century Christmas mornings in a small town in the Midwest.  He’s again a little boy with visions of so many things dancing in his head.  And the smell of those oranges does remind him of Christmas morning.

Ron KnechtOctober 13, 2021
Read More
Scroll for more
Tap
GM CEO’s Ears Aren’t Tin…They’re Steel
How Many Times Can You Tell Your Constituents To Go Screw Themselves?