7 Ways for Nevada Republicans to Get Their MoJo Back: Part II

7 Ways for Nevada Republicans to Get Their MoJo Back: Part II
N&V Staff

(Chuck Muth) – Continuing now with Part II of my post-mortem series on how Nevada Republicans blew the 2018 elections and what they need to do to get their mojo back in time for the 2020 presidential election (click here to read Part I). 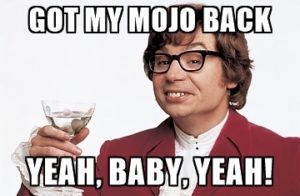 But first, a little more on this whole voter registration thing…

Yes, Democrats in Nevada had a 75,000 statewide voter registration advantage.  But despite what clueless poli-sci professors and peanut gallery pundits – such as liberal blogger Jon Ralston – say, that’s NOT what cost Republicans their elections this year.  Here, I’ll prove it again…

And yet, REPUBLICAN gubernatorial candidate Larry Hogan won with 57% of the vote.

So Nevada Republicans need to stop obsessing over voter registration and start focusing on what REALLY matters in elections: marketing and persuasion.

But before getting to messaging, we need to talk about the messengers.  And that’s #3 on my list of what Republicans need to do to get their mojo back.

Instead, they wait until the close of filing in March, then look at who threw their hats in the ring – and then try to figure out which ones are worth supporting.  It’s reactive, not proactive.  And it’s dumb.

Way back in 1995, when dinosaurs were still roaming the earth, I was chairman of the Clark County Republican Party and Sue Lowden was a Republican state senator.

And Sue put together a group of GOP leaders, elected officials and grassroots activists – a couple dozen people – who met every couple of weeks in the boardroom of the Sahara Hotel which she and her husband owned at the time.

At each meeting we searched through the voter files – printed out back then on those big, green-and-white computer sheets with the spindle holes in them.  Everyone reviewed each list for each race that was going to be on the 1996 ballot and marked off the names of anyone they recognized who *might* make a good candidate.

The candidate recruitment leadership team would then arrange to meet personally with the list of potential candidates and discuss the possibility of them running for office – including an explanation of what exactly was involved in being a candidate (the biggest obstacle to recruiting candidates is the candidate’s fear of the unknown) and what resources would be available to them if they decided to run.

So, what did we look for in evaluating who might make a good potential candidate?

At the time we focused on individuals who were already actively involved in the community somehow.  Members of a PTA, Kiwanis, business groups, social groups, charitable organizations, the Boy or Girl Scouts, etc.

Good targeting idea.  But after more than 20 years in this biz, I now look for something more.

And I especially look for entrepreneurs, as a political campaign is, at its core, a business operation in which a good deal of risk must be taken.

Entrepreneurs – as opposed to salaried business managers – are used to facing and accepting such risks and making tough decisions.  So, give me an entrepreneur with a successful history of sales and marketing any day ending in “y.”

Even the best salesman in the world is gonna have a tough time selling surf boards to Eskimos in the winter.  Ditto running Republican candidates in certain districts in which the demographics make it all but impossible for the Republican candidate to win.

Not totally impossible.  Remember the Maryland gubernatorial race this year.

But with so many “low hanging fruit” races out there – races in “swing” districts – why waste valuable time, energy and resources on impossible dreams rather than targeting efforts to decidedly winnable races?

Unless, of course, Republicans have unlimited resources.  Which they don’t.

Bottom line: While Republicans had some good candidates on the ballot this year who lost thanks to bad campaigns, there were a lot of races where the party ended up running with bad, often “gadfly,” candidates who just happened to file for office on their own.

May as well just open the phone book (remember those?) and pick names out at random.  Recipe for disaster.

Republicans need to put proactive “recruitment” back in “candidate recruitment.”

Coming up next in Part III: Messaging.  Plus the biggest mistake Nevada Republican Party organizations – state and county parties and various clubs – make every election cycle.  Oh, and how to fix it.  Stay tuned, Batfans…

The Center SquareNovember 7, 2022
Read More
Scroll for more
Tap
LEVEY: Google Isn’t to Blame for Anti-Conservative Bias
USDA to Restore Original Intent of SNAP: A Second Chance, Not A Way of Life