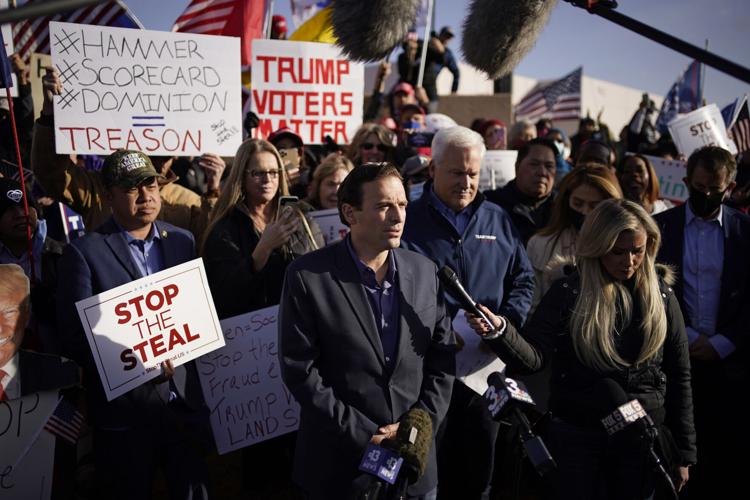 “[The whistleblower] says he was also told to ignore discrepancies with addresses,” according to Fox News’s John Roberts, who obtained the affidavit. Fox News reported that the affidavit was submitted to the U.S. Department of Justice by the Trump campaign.

“A Trump campaign attorney says of that, quote, ‘The affidavit makes clear that we’re not dealing with oversights or sloppiness. This was intentional criminal conduct,’” Roberts said.

As of Monday, Nevada Attorney General Aaron Ford has taken no action to investigate fraud claims stemming from the general election last week.

American Conservative Union Chair Matt Schlapp alleged during a news conference that votes were cast using the names and information of deceased individuals and that underage individuals voted. Schlapp, on behalf of the Trump campaign, also alleged that at least 9,000 non-Nevadans voted in the state.

Clark County Registrar of Voters Joe Gloria told reporters Saturday that his office received reports of potential voter fraud and would investigate them but not until after the election was over, a statement the Nevada GOP and Trump campaign says is not good enough.

“We do have some reports that have come in that we’re logging for reporting. But we’re definitely going to do an investigation, and we’ll deal with them once the canvass is finished,” Gloria said, according to the Washington Examiner. “The votes are in the system at this point, so we’ll have to after the election, post-election, go after anything that’s been reported at this time.”

The Nevada GOP has posted pictures alleging that ballots “were abandoned on top of a mailbox,” among other allegations.

In one example, Nevada GOP tweeted that “J.S. showed up to vote in person and was told she already voted by mail with her signature verified. But, she never received a mail-in ballot & never cast that vote. Report #1010.”

In another, Nevada GOP posted a video allegedly depicting election law being violated. Accompanying the video, Nevada GOP stated, “This voter was in line on the last day to ‘cure’ his provisional ballot by providing proof of residency. The Nevada Clark County official lied and told the voter if he voted it would count. This is not the only case in Nevada of a voter losing their voice.”

Clark County, home to Las Vegas, accounts for the vast majority of voters in the state. It is still counting ballots through Nov. 16.

On Election Day, Gloria indicated that reports of improper ballot casting were near nonexistent and his office had only identified one improperly cast ballot.

The Trump campaign and Republicans filed a lawsuit and submitted a complaint to the Justice Department last week, alleging that Clark County failed to maintain its voter registration list and enabled fraudulent voting.

“It’s not out of the ordinary at all for somebody not to live here but be eligible to vote here, so we will look at that, and we’ll review it,” Gloria added.

But according to the Nevada Secretary of State’s Office, the residential address listed on the voter registration form must be the legal place of residence and the applicant must “claim no other place as my legal residence.”

Other requirements to vote include being a U.S. citizen, being at least 18 years old by the date of the next election (preregistration requires the individual to be at least 17 years old), and not currently being incarcerated for a felony conviction.

If registered voters have moved, changed their name, want to change party affiliation, or need to update their voter registration status for any other reason, they are required to submit another voter application form.

Nevada has a 102.7% voter registration rate, according to an analysis by Judicial Watch. There are more voters registered in Nevada than are eligible to vote, Judicial Watch says, and about 154,000 inactive names were on the rolls before the election.

Biden is leading Trump by roughly 36,000 votes in the state.