(The Center Square) – Joe Biden leads President Donald Trump by under 12,000 votes in Nevada as more votes trickle in across the state, and the president’s campaign pursues a lawsuit over what it alleges is illegal vote-counting.

If the counts hold in all other states that already have been called, Nevada’s six electoral college votes would Democrat Joe Biden to 270, exactly what he needs to win the presidency. But Trump’s campaign has asked for a recount in Wisconsin and also filed lawsuits in Michigan and Pennsylvania.

Trump’s campaign said during a news conference in Las Vegas on Thursday that it was filing a lawsuit in federal court challenging alleged fraud in Nevada.

Former Nevada Attorney General Adam Laxalt, co-chair of Trump’s campaign in Nevada, said they believe “there are dead voters that have been counted.”

“We are also confident that there are thousands of people whose votes have been counted that have moved out of Clark County during the pandemic,” Laxalt said.

Laxalt said the lawsuit will ask “to stop the counting of improper votes.”

“Ballots are not automatically legal votes until they are checked,” Grenell said. “We are not being allowed to check.”

He said the campaign has evidence that state law is being violated by non-resident votes being counted despite a 30-day residency requirement.

Grenell also alleged that “the Harry Reid machine recklessly threw ballots into the mail” so they can’t be checked, later adding “now we’re seeing discrepancies all over.”

The Nevada GOP said Thursday evening that it has asked U.S. Attorney General William Barr to intervene in the state, alleging thousands of cases of voter fraud.

“Our lawyers just sent a criminal referral to AG Barr regarding at least 3,062 instances of voter fraud. We expect that number to grow substantially,” Nevada GOP tweeted. “Thousands of individuals have been identified who appear to have violated the law by casting ballots after they moved from NV.” 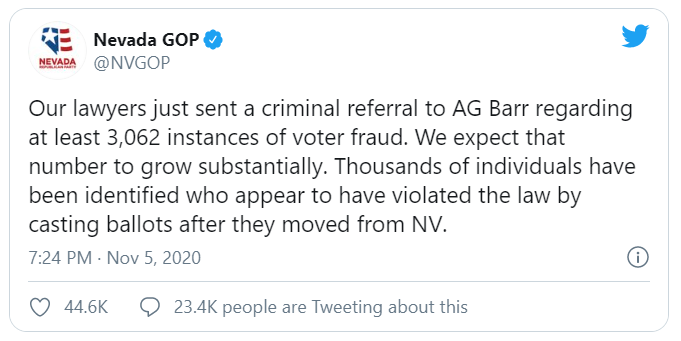 Nevada officials said Wednesday that it was still counting “mail ballots received on or after Election Day” and ballots from voters who registered at polling places on election day.

The Trump campaign also has filed lawsuits in Pennsylvania and Michigan, and is demanding a recount in Wisconsin.

This story is developing.