I’ve learned that the Clark County Republican Central Committee Executive Board voted UNANIMOUSLY last night to rescind its invitation to former Arizona Sheriff Joe Arpaio to keynote their convention on May 5th. 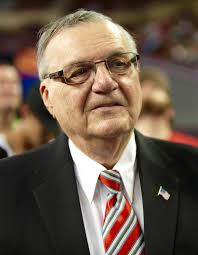 My source tells me party leaders got spooked by the fact that the convention falls on Cinco de Mayo – something apparently no one realized until the media brought it up – and worried that if Arpaio was there a whole host of Nevada Republican candidates and elected officials wouldn’t show up.

Like how Sen. Dean Heller boycotted the Douglas County Lincoln Day Dinner a couple weeks ago because Arpaio was speaking.

They also were scared that having Arpaio speak would offend Latino voters and could result in protests.

So much for profiles in courage!

Adding insult to injury, I spoke with Sheriff Joe this morning and he told me someone from the party called him earlier and gave him some B.S. song-and-dance that they changed their mind and decided to only feature Nevada candidates and not bring in any out-of-state speakers.

Yet I also heard they’re now talking about trying to bring in Congressman Devin Nunes from CALIFORNIA instead.

In other words, they told Sheriff Joe a whopper.  And he’s not a happy camper about it.

So here’s what we’re gonna do…

I told Joe I’d see about maybe putting together a fundraising event just for him and his U.S. Senate campaign here in Las Vegas instead.

Would any of y’all be interested in that?  Shoot me an email and let me know.

Brent Jones, president of the REAL Chamber of Commerce, is hosting a meet-and-greet tomorrow night featuring a slew of pro-business candidates who will be running for various offices this year.

The event will be held at Mingo Kitchen and Lounge in the Arts District in downtown Las Vegas – which is owned and operated by George Harris, creator of the famous Alien Tequila and a former Clark County GOP chairman (when the party wasn’t so squishy!) – from 5:00 to 7:00 pm.

The event is FREE and open to the public.  All guests will enjoy happy hour prices…PLUS…the first 25 business owners will receive a FREE margarita ($8.50 value)!!!

Among the pro-business candidates confirmed to be there…

Also confirmed to be “in the house”: Talk-show host Kevin Wall, Nevada Republican Party Chairman Mike McDonald…and yours truly, with a stack of Taxpayer Protection Pledges for anyone wanting to sign one!

* According to the latest figures as reported by the New York Times, Republican Rick Saccone lost the special election yesterday in Pennsylvania to Democrat Conor Lamb by 627 votes.  The Libertarian Party candidate in the race drew 1,379 votes.  I’m just saying.

* Someone has reportedly been poll-testing Danny Tarkanian’s name for the 3rd Congressional District seat.  Tark told a reporter that it’s definitely not him doing the poll and that there is “zero chance under any circumstance” that he’ll run for that seat this year.

* Republican Assembly Minority Leader Jim Wheeler-Dealer also filed for re-election last week…causing Assembly Democrats to pop champagne corks and do the Snoopy Dance over there now being zero chance for the GOP to re-take control of the lower house in November.

* There’s an anonymous email going around claiming that former Republican Assemblyman Brent Jones, now running for lieutenant governor, is leading a “covert whisper campaign” against Republican Secretary of State Barbara Cegavske and “actively working to recruit a primary opponent against” her.

Untrue!  Complete fabrication.  I spoke with Brent this morning and he has ENDORSED Secretary Cegavske for re-election.  So if you see this email, send it right to your “junk” file.

Here’s the thing: Unless you already have a solid anti-tax hike record – such as Sen. James Settelmeyer and Assemblyman John Ellison – I’m not supporting any legislative candidates publicly who refuse to sign the Taxpayer Protection Pledge.

And I was just informed this morning that Mr. Brooks has told people he won’t sign even though he’s never even had a conversation with me about it.

Sorry, Charlie.  But if you don’t sign, I don’t support.

“Republican elected officials who vote for tax hikes are ratheads in a Coke bottle; they damage the brand for everybody else.” – Grover Norquist, President of Americans for Tax Reform and Father of the Taxpayer Protection Pledge