(Ken Minster) In George Washington’s Farewell Address, he warned of the “baneful effects” of political factions. I’m sure he would have turned over in his grave if he knew that last night I attended two Clark County Republican Party meetings at the exact same time. Yes, in Vegas we got factions inside of our factions, baby! One was held virtually, helmed by former State Assemblyman Stephen Silberkraus; the other held in person and ran by former Trump administration official, Jesse Law.

For context, the CCRP has been used as a proxy battleground for control of the Nevada GOP so each side has their own elected leadership and won’t back down. Things have been at a standstill for nearly a year and court rulings that haven’t defined who is in charge have brought us to this Two Party System we have right now.

It’s the culmination of months of court battles, police incursions, merchandising, national news attention, all-around bad feelings, use of words like “terrorizing” and “communist dictator” and, in general, poor professional behavior. This knockdown, drag-out fight has been an embarrassment for all of us in Nevada who are registered Republicans. Personal grudges and undisciplined leadership have resulted in two different organizations fighting for control of a namesake that has ZERO credibility, ZERO assets, ZERO record, and ZERO infrastructure. I wrote about the rough state of the Clark County Republican Party a little while back and even included some fun, quick reforms that I hope either of these two new Chairs will adopt.

And you know what? Good. No, really.

Yeah, there will be a fight over who owns the web domain and the Mailchimp account or some ancient printer that no one printed anything on EVER and a checking account that probably has like $1,000 in it or something but I think it is time to end this kerfuffle and let people join either one and get involved and start working. We are decades behind the Democrats, friends, and the stakes have never higher for our purple state.

But, seriously. As fond as we are of decentralizing the Clark County School District and promoting free competition, I say we let both organizations go their separate ways to recruit members and talk to voters in Clark County. Break up CCSD? Break up the CCRP! Two parties? Why not four? Why not 63 and make an organization for every Assembly District like they do in some other states?! And for those that are worried about our brand being tarnished by one side controlling the namesake, I have some tough news for you. There isn’t much left to tarnish in Nevada’s ailing Republican ecosystem.

Besides, either organization is going to probably work to do the exact same things as the other and one or both might actually be successful. If that is even half true, it will be such a radical change of pace I wouldn’t know what to do with myself. 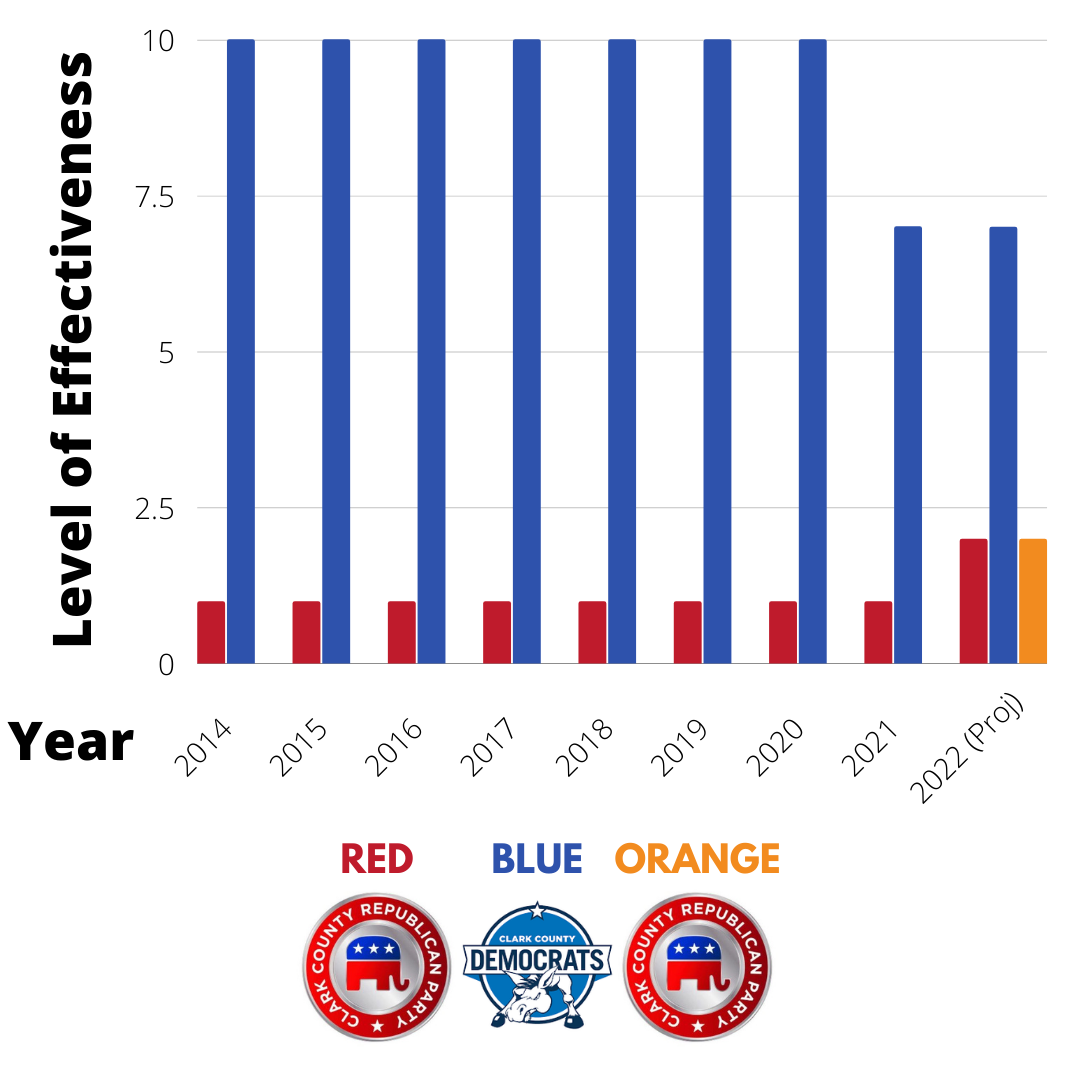 This is a completely scientific graph, by the way. The dip in Dem effectiveness is only due to their own internal power struggles with Democrat socialists in their ranks. It will distract them but not paralyze them.

We’ve had such a decade-long hiatus of functioning party leadership in this part of Nevada that having two organizations increases our chances that something good would get done by… 100%! Both organizations are functionally starting at zero unless you count the pending FEC violations against the Silberkraus faction as a negative. Also, the fact that the Nevada GOP will probably refuse to recognize anything they do including the delegates they will send to the upcoming State Central Committee meetings in Winnemucca might be another negative.

But, as a Republican who sees our state growing ever bluer, I want both of them to succeed. I hope that newly elected Chair Carrie Ann Buck can take her skills at being a “fixer” to develop a well-oiled machine thanks to her strong community connections. I hope that newly elected Chair Jesse Law can use his dedication and work ethic to sign up hundreds of people to the Republican cause and leverage his relationship with the Nevada Republican Party to develop a well-oiled machine.

Because, honestly, the naming rights don’t matter. If a judge steps in and strikes one faction down for good, they will use their own circle to build a shadow party or strong political organization that they will then (maybe a little angrily)… perform all of the similar functions of a County Party they were hoping to do otherwise. People on both sides of the fight have told me as much in private conversations. I’ve also seen both sides’ political plans and goals for 2022 and I say… let them both do it! Besides, the bad feelings are so deep and personal now that I don’t see how anything good could come of having either of them stripped of their right to recruit Republican candidates and volunteers, find donors, and fight the Democrats under the Republican name.

So, choose your flavor, folks. And if someone you know chooses the mint chocolate chip CCRP instead of the rum raisin CCRP, let them. Because if all these angry feelings can be turned towards building their own functioning Republican organization, the only people that can benefit are us as Republicans because two organizations are better than the none we have right now.

I encourage you to choose whichever group is filled with your friends and people you like and make an impact. The worst thing we can do is make a fuss over tribes and then not actually join, volunteer, donate, and participate in SOMETHING. I’ve included the contact information for both parties below and will probably see you at events for both. Because there is LITERALLY nowhere to go but up from here.

Choose your flavor below and let’s get to work!

The Clark County Republican Party
aka “The Zoom Club”

The Clark County Republican Party
aka “The Rouge Faction”

UPDATE: A couple of people have asked me about the “Rouge” in Rouge Faction above. This is a super inside joke and I should have explained. During this whole thing, the Silberkraus faction called the Law faction a “rogue” group but misspelled it as “rouge” in official emails and social media posts like 5-6 times. Insiders thought it was funny and adopted it.

Ron KnechtOctober 23, 2021
Read More
Scroll for more
Tap
Why Capitalism Works and Government Control Doesn’t
How Liberals Think v. Conservatives and the Rest of Us