Clinton is focused on the wrong threat

Clinton is focused on the wrong threat
N&V Staff 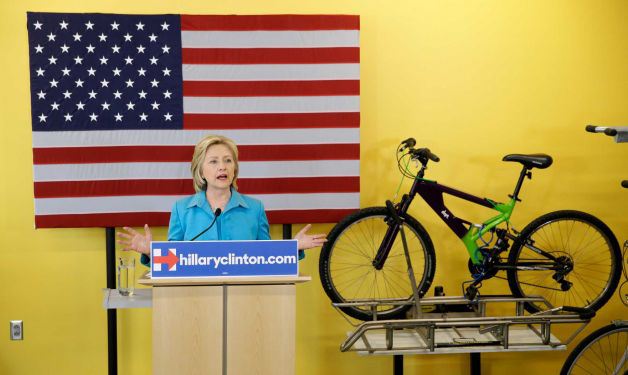 (Thomas Mitchell) –  Hillary Clinton is in a corral with a charging bull but worries there might be a mouse on the loose.

In a speech in Des Moines, the text of which was emailed to supporters, Clinton called climate change “one of the most urgent threats of our time, and we have no choice but to rise and meet it.” To do this, she proposed putting solar panels on every house in the country. “Not some homes. Not most homes. Every home in America.”

This trillion-dollar expenditure of our money is intended to stop the planet from warming 1 or 2 degrees over the next century.

Meanwhile, there is a little issue that has not been recognized by any presidential candidate and darned few lawmakers — the threat of electromagnetic pulse or EMP, which could be caused by a solar flare or a high-altitude nuclear detonation.

Former Central Intelligence Agency Director R. James Woolsey recently testified before the Senate Homeland Security and Government Affairs Committee, warning that EMP is “a clear and present danger and that something must be done to protect the electric grid and other life sustaining critical infrastructures — immediately.”

While Clinton’s solar panels would cost trillions, hardening the grid to protect against EMP would cost only a couple of billion.

Woolsey, now the chairman of the Foundation for Defense of Democracies, testified:

“Continued inaction by Washington will make inevitable a natural or manmade EMP catastrophe that, as the Congressional EMP Commission warned, could kill up to 90 percent of the national population through starvation, disease, and societal collapse. Indeed, some actions taken by the Congress, the White House and the federal bureaucracy are impeding solutions, making the nation more vulnerable, and helping the arrival of an EMP catastrophe.”

Meanwhile, Hillary Clinton is prattling on about how she will: “Transform our grid to give Americans more control over the energy they produce and consume.”

If there is a grid to transform, she would make it far more difficult to maintain, because solar power is intermittent and fluctuates with every passing cloud, much less nightfall.

But, it would certainly line the pockets of some here biggest supporters. According to the Washington Examiner, some of the largest solar contractors in the country — First Solar, NRG Energy and SolarCity, to name a few — have financial ties to the Clintons.

Clinton also pointed out one of the biggest problems with her solar panel proposal, and that is other countries are not cutting their carbon outputs and are in fact increasing the use of cheaper coal.

“We also have to mobilize an unprecedented global commitment to reduce carbon emissions around the world,” she said. “And I know firsthand from my time as Secretary of State that America’s ability to lead the world on this issue hinges on our commitment to act ourselves. No country will fall in line just because we tell them to. They need to see us taking significant steps of our own.”

That’ll bring them on board.