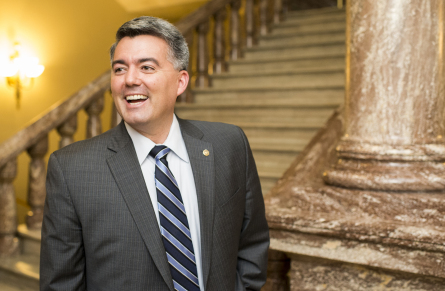 Gardner entered the Colorado Senate race at the last minute in 2014, and has become the model for campaigns that wait longer than usual to launch. (Photo by Bill Clark, CQ Roll Call)

(Emily Cahn and Ivan Levingston, Roll Call) – When former Nevada Secretary of State Ross Miller passed on a bid in the Silver State’s 3rd District last week, it sent Democrats back to the drawing board again to find a nominee for this Tossup seat in 2016.

Miller’s decision to sit the race out was a disappointment for national Democrats, who thought his profile would make him a strong candidate for this highly competitive seat. But it’s indicative of a larger issue Democrats face this cycle: Recruiting House candidates in 2016 hasn’t been as easy as many predicted two years ago.

More than a year from Election Day, Democrats are without top-tier recruits in five of the 11 races rated Tossups by the Rothenberg & Gonzales Political Report/Roll Call. Democrats are also searching for strong recruits in at least five more of the 15 other districts rated as competitive in 2016.

The holes in the roster contrast with the message former Democratic Congressional Campaign Committee Chairman Steve Israel pushed last cycle. In a June 2013 interview with BuzzFeed, Israel said he spoke to a number of candidates in the early days of the 2014 cycle who were reluctant to run in a daunting midterm environment.