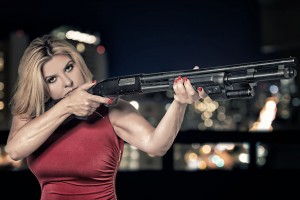 Message to liberals: “Keep your political correctness and I’ll keep my gun.”

(Assemblywoman Michele Fiore) – My thoughts and prayers go out to the victims of the horrific attacks that took place across Paris. However, continuing to offer prayers after the fact doesn’t truly pay respect to these victims or provide protection from future attacks to citizens.

What would pay them the respect they deserve would be to see the political correctness that allows these events to continue come to an end once and for all.

It is this political correctness that requires our president to refuse to comment on the motives of men who shout, “Allahu Akbar” and “This is for Syria” as they execute unarmed citizens who are simply enjoying a Friday night concert. Our government uses this political correctness to justify putting the needs of Syrian refugees above the safety of the American people.

Until our country, is once again lead by individuals who put the destruction of our enemies and the protection of our citizens first, we run the risk of seeing a Friday night concert in America turned into a nightmare!

So, yes, I will pray for all these victims, but I will also advocate for prevention and strong leadership.

We need leaders who are not afraid to say that we are at war with Islamic extremism and create a plan of action to defeat them. We need advocates who create immigration policies that secure our borders and our nation. We need laws that allow American citizens the right to defend themselves wherever they are, so that no one ever again has to frantically Facebook the police begging them to storm the building while they wait their turn to be executed.

These events should be a wake up call to our government. Now is the time to stand up, speak up and take action!

So, to all you liberals I say – keep your political correctness and I’ll keep my gun. You tell me whom you want by your side God forbid we find ourselves on the floor of a concert hall waiting for our turn.”