Decisions, Decisions: None of the Above or that Heller Feller?

Decisions, Decisions: None of the Above or that Heller Feller?
N&V Staff 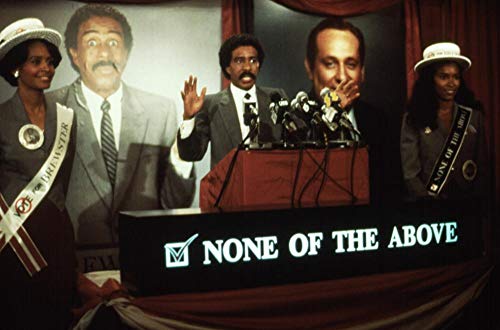 Comments and opinions continue to flood in over this question on whether to vote for Sen. Dean Heller (R-NeverTrump) in November or exercise the “None of the Above” option (or vote for a third-party candidate).

Absolutely amazing that Heller has put himself in this position…but I guess that’s what you get when you try to be all things to all people.

Before sharing with you some additional comments I’ve received over the weekend, I want to address the point many people are making that a vote for “None of the Above” is a vote for the Democrat candidate in the race, Wacky Jacky Rosen.

Here’s the point: In the 2016 presidential election, Heller said “I have no intentions of voting for him (Trump),” adding that “This is the only state that gives you a third option, and that’s ‘None of the Above.’”

And does anyone in their wildest dreams think Wacky Jacky is anywhere near the threat to our republic as Crooked Hillary was – especially considering the two Supreme Court seats she would have filled?

Yeah, yeah…I know.  Heller claimed eight months later – after Danny Tarkanian announced he was running against him – that he voted for Trump after all.  And if you believe that one, I have a Nigerian gold mine you might want to invest in.

Now, on to the email bag…

On Friday, DC Dean’s crack (or on “crack”) communications team put out this dumb tweet…

“I’m old enough to remember when the experts and media mocked President Trump’s goal of hitting 3% annual economic growth as a ‘pipe dream.’”

This, of course, left the door wide open for me to reply with a series of tweets…

Some people in glass houses never seem to learn.

Orrock Riding Off into the Sunset

Nevada Republican National Committeewoman Diana Orrock announced over the weekend that she was stepping down from her position.

“After much consideration over the past few months, I have decided to resign from my elected position,” Orrock wrote, adding, “I am becoming more and more conflicted about the kind of Republicans that are being elected to political office, particularly at the state and national levels.”

One can reasonably assume that among the Republicans giving her heartburn are Gov. Brian Sandoval, Sen. Dean Heller, Senate Minority Leader “Tax Hike Mike” Roberson and the rest of the GOP sell-outs in the Legislature who voted for the largest tax hike in state history in 2015.

Diana was unique as a party official.  While an unabashed party loyalist she nevertheless had no problem bashing wayward Republican elected officials who wandered off the GOP’s limited-government reservation, much to the consternation of targeted elected officials who believe the tail should wag the dog.

Diana was also unafraid of sharing her viewpoints with the media.  Ask her a direct question and you got a direct answer. No pussy-footing around.

And she has a strong “live and let live” libertarian streak running through her philosophical veins, evidenced by her support of Ron Paul’s presidential runs in 2008 and 2012.

In 2016 Diana was the first party official in the country to come out in support of Donald Trump – not so much as a kindred libertarian spirit but for the promise of electing someone who would disrupt the status quo in Washington, DC and “drain the swamp” of establishment Republicans who for years have been putting the screws to conservative GOP candidates.

She will be missed.  We wish her the best!

P.S.  As to who might replace Diana, KLAS-TV 8 reporter Steve Sebelius has another scoop…

“So who might be in line to replace the controversial @DianaOrrock…? I hear none other than Las Vegas Councilwoman Michele Fiore (@VoteFiore) wants the job.”

Weak-kneed Republican elected officials who may have cheered Orrock’s resignation will be shaking in their tighty-whities this morning over that prospect.  Like Diana, Michele is no shrinking violet.

To paraphrase a great line from a great movie, Patton: “The lions in their dens tremble at her approach.”

“The only good thing about #socialism is that most of us aren’t stupid enough to fall for it.” – @THEHermanCain

“#Republicans must vote in droves to have a fighting chance. Remember: you’re not only facing #Democrats. You’re fighting dead voters, illegal alien voters, and repeat voters. That is, if you can even get to the polls past Black Panthers intimidating you.” – @RealJamesWoods