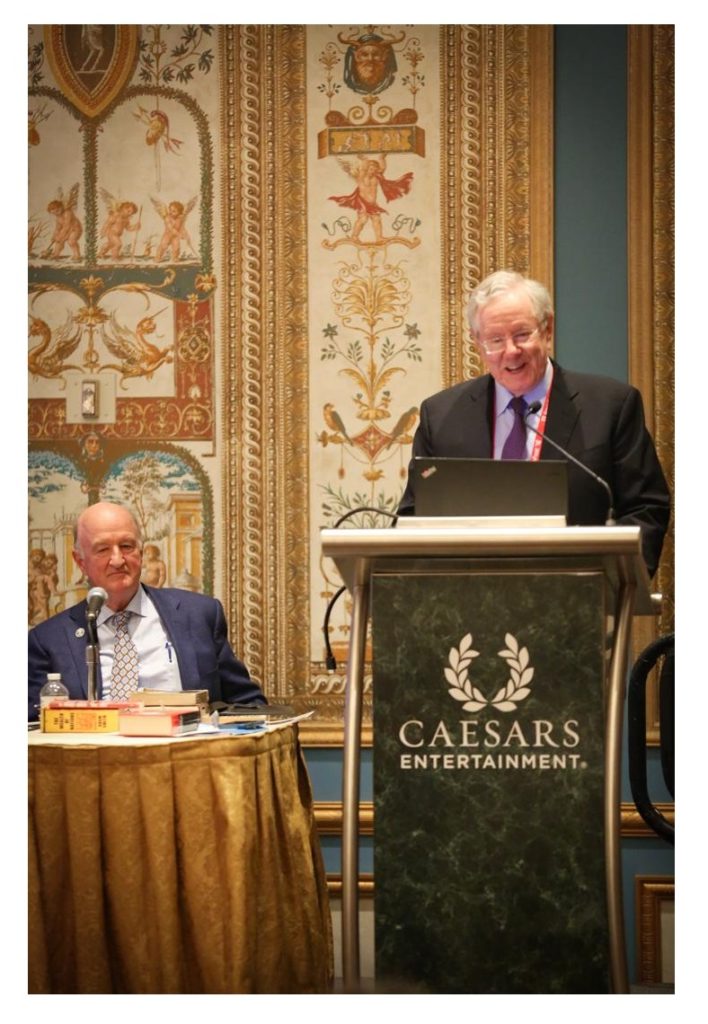 Smith, Marx and Keynes all believed in various ways in what you might call an equilibrium, that the economy is a steady state and you get disruptions from time to time, whether wars, earthquakes or new inventions. You get some turmoil and then things settle down and you have an equilibrium, which is why even John Stuart Mill became a socialist (not because of the influence of his young wife).  He couldn’t understand the role of profit.

Even Adam Smith did not understand the role of profit. If you have an economy where you are striving for a perfectly competition equilibrium, there is no role for profit, other than as a bribe for entrepreneurs to do things. Schumpeter was an infidel, in the words of Peter Drucker.  That is, he saw profit as a cost of doing business, as a moral force. Why? Because in his mind the economy is always dynamic.  A free market is dynamic, always changing, what he called creative destruction.  You focus on the creative side.  But it’s also destroying, which means it’s destroying capital and you have to replace that destroyed capital with new capital.

Also, how does an economy advance?  It advances with new knowledge. Where does knowledge come from? Through constant experimentation by entrepreneurs in the marketplace.  Look at Silicon Valley.  Look at Peter Thiel. He says eight out of ten ventures, even with great brains like his, will fail. Only two out of ten, maybe one out of ten, will really be successful.

So, profit is essential if you’re going to have a growing economy. To replace the destroyed capital here’s one little example.  I’m not a fan of the New York Times, but decades ago they bought the Boston Globe, and a few other papers in Massachusetts, for $1.2 billion. About 20 years later they ended up selling it for about $50 or 60 million, depending on whose numbers you want to believe.  Over a billion dollars of capital were destroyed. And you have to replace this capital with new ventures.

So, in Schumpeter’s mind, profit was a cost of doing business in a dynamic, free economy.  His worry was not taking wages from laborers, but too not enough profit.  It was essential to grow and have a dynamic economy – to create the means to make it possible, to nurture it, to replace what was destroyed and to finance what is new. So, I vote for Schumpeter.

But, among the big three (Smith, Marx and Keynes), it must be pointed out that Adam Smith was a moralist. He understood, as Mark does, that economics is people. He saw the economy not just a creator of wealth, but as a moral force, which too many of all these equations we have in economics today ignore.

Which gets to the 50-page encomium that Professor Ken Schoolland wrote for Mark’s award.  Ken is also quite a fellow. You may know that he wrote The Adventures of Jonathan Gullible: A Free Market Odyssey, which is translated in over fifty languages. Maybe we can get one to the White House and to trade representatives!

But, Mark, as you know, is an amazing individual. He’s a highly accomplished economist and in a normal, non-political environment, he and a handful of others would have already won the Nobel Prize for economics. But, given the political environment we have today, that’s not going to happen right now. Maybe in the future.

He is a superb and highly original scholar. Just look at his textbook Economic Logic, now in its 5th edition, which demonstrates Mark’s ability to look at the whole economy, the real world and real people.  This rigidity between micro- and macroeconomics is not for him.  He realizes they’re all connected together. He began this book with a profit-loss income statement to demonstrate the dynamics of the real-world economy. No other textbook does that. He gets it.

And extraordinarily, Mark’s book brings in many other disciplines to teach lessons of economics, underscoring crucial lesson, whether it is history, sociology, finance business or marketing management. He recognizes that this rigidity may be nice for departments created at universities. But, in the real world, it does not advance learning.  They are need to be combined together. In that sense, he goes back 200 years to before mathematicians took over economics. His output is voluminous, with numerous books and articles.  And, what is so unusual, is that he combines mastery of math-laden fields with the ability to write clearly and directly in a manner that would have elicited cheers from Ernest Hemingway. Imagine, he gets to the point.

So, you won’t win an economic argument with Mark by trying to outdo him with regression analysis, graphs and comprehensible equation. He’ll hit you right back.  He’s master of that.

But, he’s unique with his fascination with history, with flesh and blood individuals. Read his concise and incisive sketches of numerous economists in “The Making of Modern Economics.”  He brings history to life. People are interested in people. He recognizes that stories are highly instructive.

And, this is very fascinating:  Mark is a genuine heir to Ben Franklin, a direct descendant.  And he apparently inherited Franklin’s genes of versatility and range of interests. He’s also, among other things, a talented thespian. Taught by his wife, but he learned very quickly.

And, one of Mark’s other greatest achievements is finishing Franklin’s autobiography. Franklin stopped writing his autobiography in 1757 at the age of 51.  But, the most interesting part of his life happened in the next 30 years, including the Constitutional Convention, his diplomacy in France, where he put on the coonskin cap to show that he’s a frontiersman. He was actually a very sophisticated scientist. But, he played to the images of Americans in the French court. He knew how to seduce diplomats and others, and played a crucial role in the French alliance, which gave us the wherewithal to win the revolution.

But Mark, with his help of his wife Jo Ann as editor, finished his autobiography, and they did so by using Franklin’s own words from speeches, pamphlets, books, Poor Richard’s Almanack, newspaper articles – a dazzling achievement. In this sense, this book surpasses the work of 99% of today’s professional historians in terms of audacity, originality and adherence to the truth.  In short, Mark is an outstanding historian, as well as an economist.

He’s a pioneering thinker. This is what I think he’s a really going to be noted for. He’s pushing the concept of the gross output.  I prefer the acronym GO.  What does GO mean?  It’s a more comprehensive way to measure the economy at all stages of production.  GO is a better way than GDP to take a picture of our economy. It’s like the difference between an x-ray and an MRI.  GDP is the x-ray; GO is the MRI.

The GDP is like looking at a carton of milk in the supermarket and ignoring all the cows that you had to raise, and pasteurize the milk, then bottle the milk and deliver the milk.  GDP gives you a very incomplete picture.  It’s just final output.  Alone it’s misleading and that’s why you read time and time again, GDP shows that 70% of the economy is consumption. That is absolute nonsense.

What makes consumption possible is people’s income, which comes from investment. And so, GO looks at the whole economy from production to final output and show that investment is the big part of the economy, not consumption. Also, GO knocks government down to size.  In terms of GDP, they say the more government spends the better the economy is. Ask the old Soviet Union how well that worked.

The BEA – the Bureau of Economic Analysis – is finally beginning to recognize the value of GO.  Right now, they come out months later after GDP.  But thanks to Mark, it is now being published by the federal government, and eventually is going to replace GDP as a much more accurate picture, much more sensitive and full picture of what is actually happening in the economy. And I think it was late last year, we saw GO that the economy was beginning to pick up a real head of steam before GDP showed it. So, Mark is on to something with that.

And so, without investment you get stagnation and turmoil.  GO saves us from a profound misconception that if you just juice up spending, you get prosperity.  The future belongs to GO.  A hundred years from now, we will celebrate Mark’s contribution.  Just as Billy Beane did in baseball (remember Moneyball?), how this whole new set of statistic had people looking at baseball player performance in a whole new way. Now they’ve all adopted it. Soccer’s doing it, basketball is doing it.  And Mark is doing it in economics – a whole new way starting to look at the economy and that way we get ideas shape on how we see the world.

So enough of my verbiage.  Mark has done many other things.  He’s a great investor, he’s written great books on investing, he created FreedomFest.  All tributes to his creativity.  He also married Jo Ann, best thing he ever did, which is why we’re all here today.

With that, Mark richly deserves this award, and this will be a dress rehearsal for a trip to Stockholm.  He will be going there some day, or your heirs will to get the prize that he should have had, and some day will have.

N&V StaffSeptember 8, 2022
Read More
Scroll for more
Tap
Brennan Voted For A Communist AND Has A Security Clearance
Lamestream Media Shows Its Bias in Kavanaugh Coverage