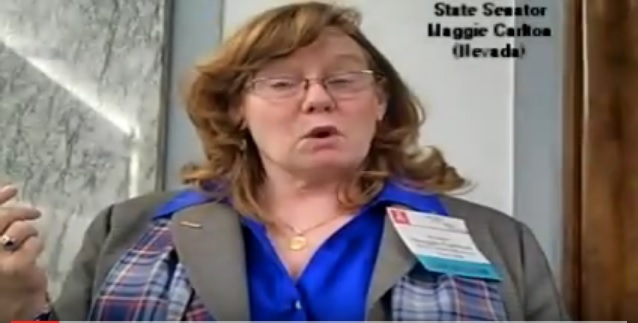 (Chuck Muth) – OK, let me get this straight…

A government bureaucrat who chairs the Gaming Control Board secretly taped a conversation with Republican Nevada Attorney General Adam Laxalt over a year ago without Laxalt’s knowledge or permission, turned the secret recording over to the FBI, which then investigated what was said in the conversation, and determined that absolutely nothing illegal occurred.

As a refresher, here are just some of the types of extremely serious crimes the FBI investigates, in addition to public corruption, to remind everyone just how well-equipped and experienced the agency is to do investigations: Terrorism, weapons of mass destruction, murder, kidnapping, organized crime, counter intelligence and cyber-crime.

Despite the professional investigators at the FBI declaring “there’s nothing to see here” over the secret “Laxalt Tapes,” part-time State Assemblywoman Maggie Carlton (D-Culinary Union) – a coffee shop waitress with no law enforcement experience whatsoever – intends to launch her own Clouseau-like investigation into the matter this week with hearings.

No, this isn’t a political hit job against Laxalt, is it?

Look, any Democrat-led legislative hearing on this year-old closed case will be nothing but political theater.  A circus show trial.  A kangaroo court.  A star chamber character assassination.  And everyone knows it.  Everyone.  Including Carlton.

So one of two things should now happen…

1.)  Assemblywaitress Carlton should announce that upon further consideration she trusts the professional investigators at the FBI and is dropping her absurd partisan hearing, complete with a public apology to Attorney General Laxalt for dragging his good name, as the Las Vegas Review-Journal put it in an editorial today, through the mud with nothing more than “rumor and innuendo.”

2.)  If Assemblywaitress Carlton proceeds with her clownish hearing, the minute she opens her mouth about it every Republican in the room should get up and walk out in protest.  There is absolutely no reason whatsoever for any Republican legislator to sit there and legitimize this political hatchet job.