The Trump Effect: How to “Fail” Our Way to Greatness Again

The Trump Effect: How to “Fail” Our Way to Greatness Again
N&V Staff 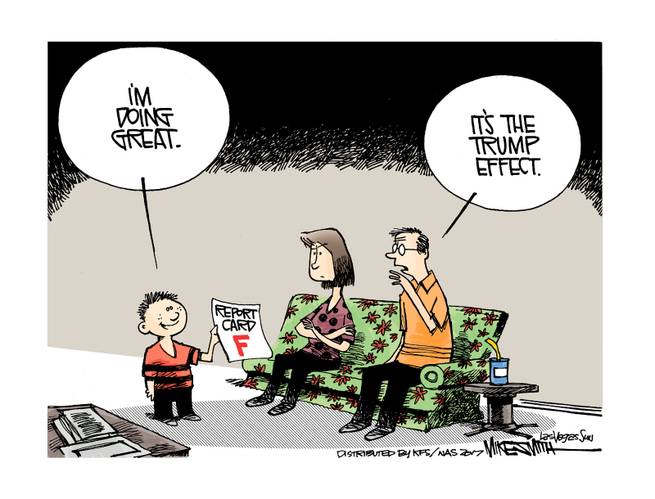 (Chuck Muth) – A recent editorial cartoon by Mike Smith in the Las Vegas Sun depicts a little elementary school boy showing his mom and dad his report card with a big “F” on it.

To which the father says to his wife, “It’s the Trump effect.”

Now, this was supposed to be yet another in a long and seemingly unending line of liberal media shots at the president.  However, the award-winning cartoonist actually stumbled upon an inconvenient truth that most on the left and far too many on the right have missed.

In Trump’s world – that is, the world of successful businessmen who create real jobs – getting an “F” really IS doing great.  Let me explain.

Back in 2011, long before Donald Trump was elected president, he co-authored a book titled “Midas Touch: Why Some Entrepreneurs Get Rich – And Why Most Don’t” with Robert Kiyosaki, author of the best-selling “Rich Dad, Poor Dad” book.

In it, they explain what’s wrong with public education today, even in the “good” schools.  Wrong, that is, for people who want to actually achieve the American dream of being their own boss and not have to worry about where the rent payment is going to come from next week.

“Success in the world of the classroom means not making mistakes,” Kiyosaki writes.  “When your report card is perfect, you get an A+.  The opposite is true in the world of business.”

“To be successful in the world of entrepreneurs, a person must learn to fail, correct, learn, apply what was learned, and fail again,” Kiyosaki continued.  “Success comes from failure, not from memorizing the right answers.”

Indeed, many students will have learned from history class that Thomas Edison “failed” over 10,000 times in his effort to invent the light bulb.  But as Edison explained, “I have not failed; I’ve just found 10,000 ways that won’t work.”

“In the real world of entrepreneurship, by contrast, the people who make the most mistakes – and learn from those mistakes the fastest – are the winners.  . . . Being school smart isn’t the same as being street smart.”

And that’s exactly how the Trump effect is going to help make America great again.  Three cheers for “failure”!