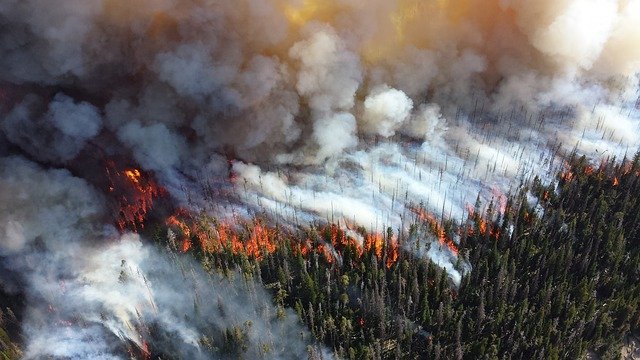 (Doug Flaherty, TahoeCleanAir.org) Before the ink had dried on the August 8, 2020 Memorandum of Understanding between CA Governor Gavin Newsome and USFS Chief Vicki Christiansen to burn an additional 1,000,000 acres of California Wildland per year, Cal Fire and USFS Executive Managers turned much of California’s into a raging inferno.

Toxic pollution generated by California’s “eco-engineering” burn practices has been wreaking havoc on Nevada’s clean air, unleashing waves of burn smoke pollution filled with toxic gases, particulate matter, and carbon that is impacting Nevada residents, including children, those with pre-existing health conditions or disabilities, the elderly, our families, our pets, our businesses, and our recreation way of life. California “eco-fires” are also dumping massive tonnages smoky carbon deposits into our Jewel of the Sierra, Lake Tahoe.

And what about the impact to wildlife? The world wept together as millions of wildlife including koala bears were burned up in the Australian fires, but no one is reporting on burn agency fire growth policy impacts on the death and suffering of wildlife.

Largely unknown to the public, the federal practice of “managed” vs. “direct full suppression” burns has quietly been ongoing since 1978, when according to a US Forest Service document titled Fire-Management Policies and Programs (Susan J. Husari), federal burn agency terminology and practice changed from fire control to “fire management.” While protecting structures and life safety on one front, burn managers steer and grow wildland fires on numerous other fronts.

Per USFS public-affairs specialist, Mary Zabinski ,”The (fire management) strategy is not new – it has quietly been going on for years” (Republic-AZ Central News, July 23, 2017).

Like many government policies, this eco-engineering fire policy has grown totally out of control. The USFS realized years ago that there was no budgetary advantage to putting fires out. In fact, the opposite is true and the bigger the fires, the bigger next year’s annual budget will be.  Plus, the USFS can then sell the burned timber, depositing profits back into forest district operating funds.

Entrenched eco-engineering fire managers want us to believe that fire suppression has become virtually impossible as they continue to fail in their primary role of protecting the public.

Hiding behind the excuse of climate change, firefighter safety, “steep slope and terrain,” Cal Fire and the USFS fire growth managers fail to adequately plan, procure and provide effective fire suppression resources as a priority first, foremost and always to put the fires out and protect the public. Instead, federal burn agencies have actually reduced aircraft inventory, and the USFS is calling for the position of “Firefighter” to be changed to “Fire Technician” to more accurately describe today’s fire growth and guide duties.

In response to criticism, California’s Newsome stated in an article from Politico that he “has no patience for climate change deniers amid historic wildfires”.

Whatever side of the climate change debate citizens are on, government agency officials benefit; instead of providing public safety leadership to put fires out, they conveniently use raging fire and fear of destruction and suffering to further politically motivated agendas.

As for firefighter safety, it is important to recognize the risks of individual firefighters who protect structures and life on their assigned fire front. This however, while Eco-fire managers at the same time increase personnel safety risks by growing wildland fires on other fronts, including withholding direct fire-retardant air drops.

Sadly, after action records of the last 100 wildland firefighter deaths revealed these deaths were predominantly due to failure of government supervisors to enforce safety processes, including the “10 Standard Firefighting Orders” and “18 Watch Out Situations.” Burn agencies know that fires can be put out safely, even in steep slope and terrain using overwhelming initial direct attack air resources along with ground forces.

Our Nevada elected officials, business community and our health and recreation industry must put an end to this failed policy of fire growth destruction and pollution, before the boot of the government pro-burn lobby puts an end to our Nevada way of life and air quality forever.