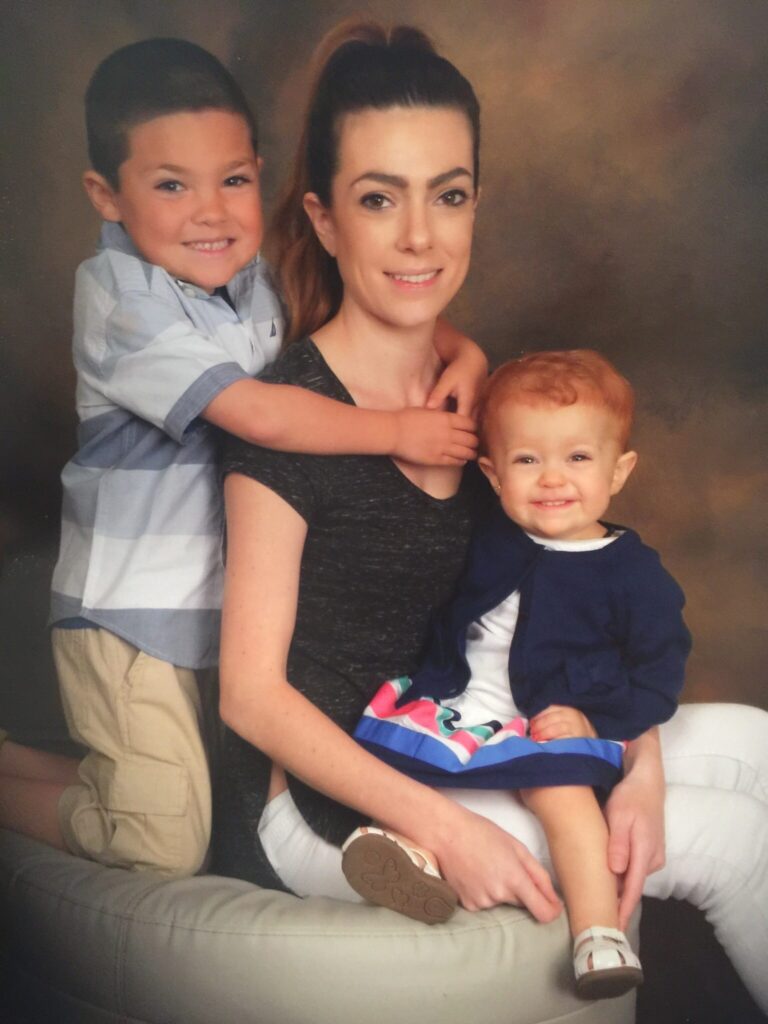 (Chuck Muth) – First…thank you, thank you, THANK YOU! Thanks to your generosity – the kindness of strangers – Brittany Sheehan, the single mom being wrongly prosecuted for “kidnapping” her own daughter from a Madera County public school and bringing her back to Las Vegas – is out of the hoosegow and safely home. All told, we’ve so far raised almost $4,000 towards Brittany’s bail bond and travel expenses to get her back to Vegas from the California gulag where she was held for two weeks. And special thanks to Jennifer Van Laar of RedState.com.  It was her report last fall that first brought Brittany’s situation to my attention.  In addition to helping raise money for Brit’s release, Jen’s also gotten Brit a new job that will allow her to continue the court fight in California. And it was Jennifer who I co-signed with on Brittany’s new bail bond which finally secured her release.

Anyway, we still need to raise some more to cover the legal expenses in Brittany’s fight to get her daughter back, but at least she’s out and able to return to work.  If you haven’t yet and are able to kick in a few pesos, click here. I caught up with Brit at the airport yesterday afternoon.  She was in good spirits and eternally grateful to all who came to her aid.  “Thank you,” she wrote on Friday night after finally being released.  “I’m blessed to have you as friends.” I’ll keep everyone posted on developments.  But again, thank you to everyone who chipped in to secure Brittany’s freedom and your support for her parental rights against the government in Madera County. Now onto other business… 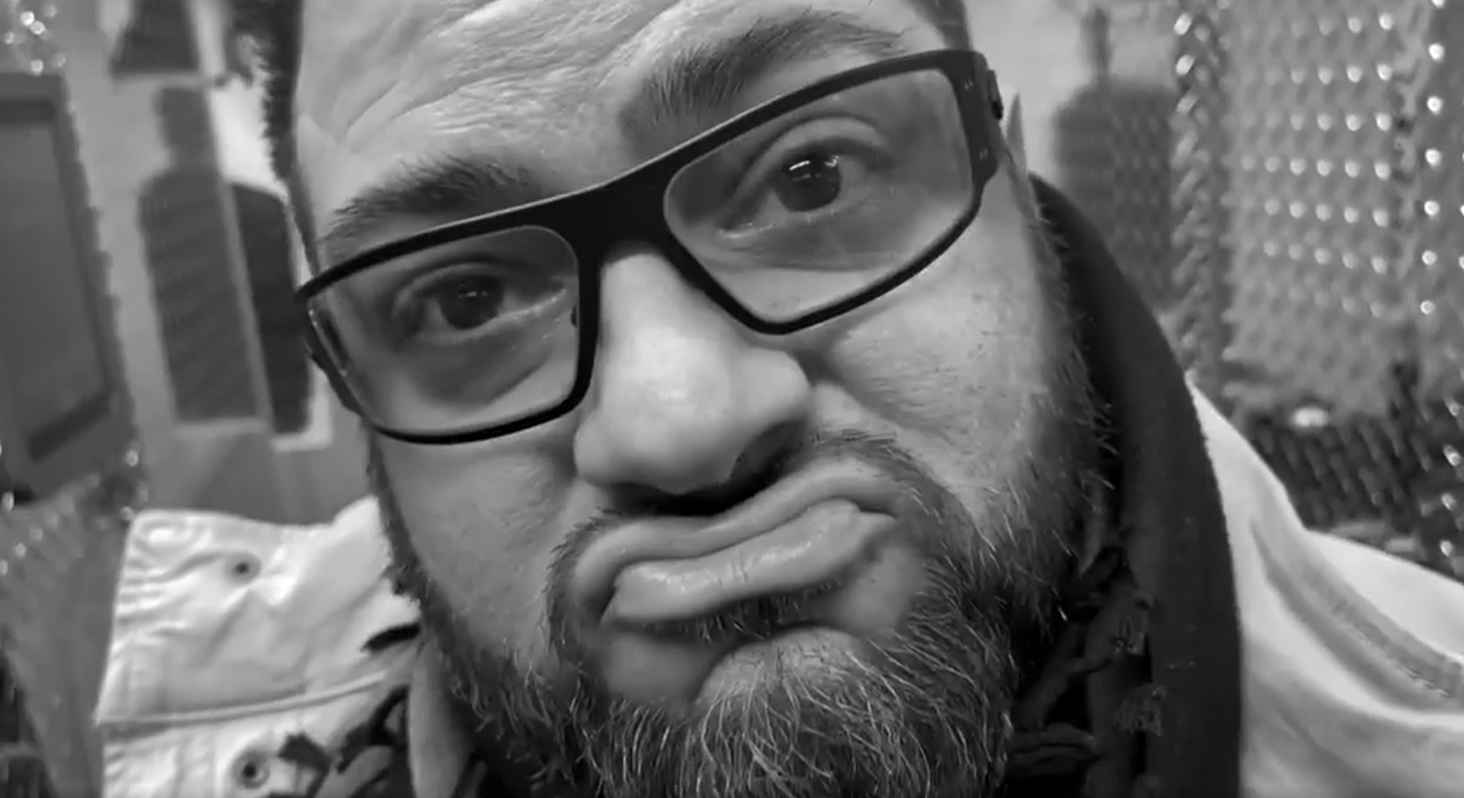 Nephi Oliva, otherwise known as Nafi Khaliki, otherwise known as Knee-High Ka-Leaky-Leaky – the jilted, love-sick piece of schitzel who had Brittany re-arrested because she reportedly spurned his sexual advances – is now obsessed with me. This whole thing started when Soy Boy asked me in early March to promote his upcoming CCW class and I politely declined.  He got his feelings hurt and decided to take it out on Brittany. At one time, he and Brittany were friends.  In fact, it was Knee-High who originally signed as guarantor of Brit’s bail bond last fall. But the two had a falling out back in January when, according to reports, Knee-High tried to extort sex in return for his guaranteeing her bond.  When she refused, he lied and claimed she was a “flight risk” in order to have her re-arrested and get his name off the bond. And just to further demonstrate what a vindictive a-hole the guy is, he waited until Brittany’s young son from another relationship was visiting with her for spring break to have Byron Brooks’ bail company pick her up, throw her in shackles, and transport her back across state lines to jail in California. A friend had to be hastily called to go pick up the boy and return him to his father.  Who does such a thing to a child? Infuriated that others came to Brittany’s defense after he screwed her over, Ka-Leaky-Leaky is now lashing out at me online for supposedly being a “Nazi sympathizer” – and Jennifer, Brittany and my wife for being, in his words, “whores.”  Knee-High has his panties in a twist because I’m an adviser to the Nevada Brothel Association and ran the legislative campaign of late legal brothel owner/Assemblyman Dennis Hof.  He wrote…      “So when I say that Chuck Muth is the state spokesman for legalized prostitution in Nevada, it naturally begs the question, ‘How does his wife feel about his involvement?’  Is she just an airhead who doesn’t even realize what he’s doing?      “If she’s okay with it and supports his involvement, then she is equally as immoral through her complacency.  If she is okay with it, what history and conditioning made her come to such an unusual conclusion that most self-respecting women would whole-heartedly object to.  Was she a prostitute in her younger years?  Or is/was she a madam?” 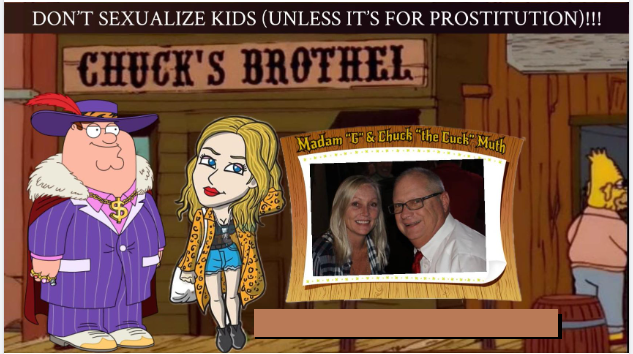 Ka-Leaky-Leaky also brags that he was somehow able obtain a copy of Gia’s credit report and questions why it doesn’t show any work history dating back to the early 90’s when she was a bartender at a local tavern, implying she’s been working as a prostitute…      “Is the reason for her lack of job history perhaps because she, too, shares his desire to capitalize on the exploitation of women?  Does she take a more active role beside Chuck in their association with legal prostitution? Was she perhaps in her prime years more than just tolerant of her husbands penchant for promoting the sexual exploitation of women?” For the record, my “aging wife” – as Knee-High describes her – bought a neighborhood ice cream truck and ran that business after leaving the bartender job throughout the 1990s.  And when our first daughter was born in 2000, she decided to sell the ice cream truck and spent the next 20 years as a stay-at-home mom, homeschooling our kids.  She went back to work, now that the kids are grown, in April 2020. Now, Knee-High thinks he made us angry for going after Gia.  Au contraire.  Gia and I just laughed at this goofball’s ham-handed effort to smear her.  Because the crap he’s writing says more about what a low-life scum he is. And while Gia’s never been politically active, she’s attended many events with me over the years and people not only know her, but know Ka-Leaky-Leaky’s allegations that she’s been a prostitute are total BS. The real question is why some prominent GOP candidates – such as gubernatorial candidate John Lee, U.S. Senate candidate Sharelle Mendenhall, congressional candidate Noah Maglieri and Clark County sheriff candidate Tom Roberts – continue to support this H.R. Puff-and-Stuff clown. I understand why this POS needs to be associated with them; it gives him an air of credibility he otherwise wouldn’t have.  But why in the world would they associate with HIM?  Whatever.  It’s a free country.  If this sexually-repressed, loud-mouthed egotist is who they want to align with, they’re free to do so.  And the beat goes on… FAMOUS LAST WORDS “Chuck and Gia Muth are disgusting examples of what it means to have ‘Conservative Values’ and they should be excommunicated from Conservative politics.  They should be excommunicated from the Catholic church.  They should have their children taken away from them.” – Nafi Khaliki, 4/2/22 “(Nafi Khaliki) signed as an indemnitor on (Brittany’s) bond, but after she rejected a sexual proposition, he refused to transfer the money Brittany’s friends had contributed to the bail agent. He then used passwords Brittany had shared with him…and locked her out of her own Facebook account for days while he posed as her.” – Jennifer Van Laar, 3/26/22 “I *love* my friends. You guys are rockstars & I can’t thank everyone individually – but I will try in direct communication soon.  I had a great time at ‘ghetto Bible camp,’ as I call it…  I want to remind you this battle is about children and under no circumstance will I abandon that principle.” – Brittany Sheehan in Facebook post after her release, 4/2/22 “I cannot believe what has happened to you Britt. Especially with your son involved. Despicable behavior. So glad you’re home.” – Nichole Williams, 4/2/22 “I’m glad to see you’re ok and I cannot BELIEVE he (Nafi) did that to you when you had your son. I’m so, so sorry – he’s a miserable human being. Hope you’re well.” – Christina Preston, 4/2/22