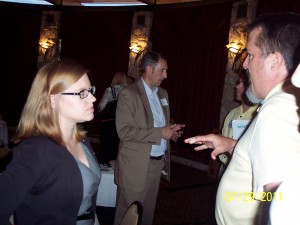 (Lori Piotrowski) – On July 29, two days before what would have been Milton Friedman’s 99th birthday, Nevada Public Research Institute held a celebratory luncheon in honor of the economist’s views on education. In a year in which one-half of Nevada’s fourth-graders are unable to read at that level, said Andy Matthews, NPRI’s vice president of operations, it is appropriate to learn more about school choice.

The program opened with a brief overview of the Friedman Foundation for Educational Choice, which was narrated by Robert Enlow, president and CEO. To date this year, 11 states have implemented school choice programs; in January, during School Choice Week, 150 events were celebrated throughout the U.S.

Friedman is often cited most for his work in economics. In fact, a search on YouTube will find dozens of film clips in which Friedman defends capitalism and free markets.

However, in 1955, he wanted to expand parents’ options in schooling, and he and his wife, Rose, began their organization. Their view was to advance a system of education, from kindergarten through 12th grade, in which every parent, regardless of race, origin or family income, was free to choose a learning environment that was best for their child.

Featured speaker at the event was Lindsay Burke from The Heritage Foundation. Ms. Burke researches and writes on federal and state education issues as a policy analyst at The Heritage Foundation, and her work has been cited by The Washington Post, The Wall Street Journal, and Fox News, and her op-eds have been published by National Review Online, The Star-Ledger, and the Boston Herald.

Beginning with President Johnson’s ESEA (Elementary and Secondary Education Act), in 1965, and continuing on to No Child Left Behind and Race to the top, the federal government has sought ways to increase funding. Now with a budget of $50 billion (4,200 employees with a salary of $103,000), the Department of Education’s efforts have yet to see an improvement in student scores.

The state of Florida, in 1996, began to implement a series of changes. Some of those changes included denying social promotion to students who could not read, allowing parents school choice, and implementing teacher accountability. (Governor Sandoval had wanted to implement many of Florida’s changes here in Nevada, but was shut down by the legislature and the teachers unions.)

Burke stayed after the presentation to answer questions from the audience.

N&V StaffOctober 7, 2022
Read More
Scroll for more
Tap
How Much Do You Owe?
NPRI Responds To Ralston’s Inaccurate Attacks