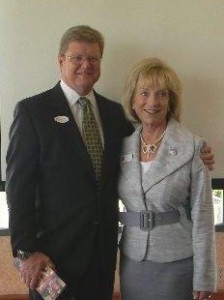 (Lori Piotrowski) – Last Thursday, July 28, more than 70 members of the Southern Hills Republican Women’s Club and their guests met at the Buckhorn Tavern for their monthly luncheon meeting. In addition to a variety of speakers, they were attending to learn more about Mark Amodei, candidate for the Second Congressional District in the upcoming special election on September 13.

First to the podium was Cathy Cohea, director of marketing for the Reagan Library. The club is hosting a two-day trip to the library in late September; Ms. Cohea’s slide presentation gave attendees a taste of what they would see and do. Some of the highlights of the tour will include listening to some of Reagan’s more famous speeches, for example, standing in front of a large portion of the Berlin Wall while the president dares the U.S.S.R’s Gorbachev to tear it down. Several motorcade vehicles are on display as well as Air Force One, which looms over the library’s restaurant.

Lynn Armanino, campaign chairperson of Southern Hillsl, urged members to turn their vote into 8 by actively participating in the upcoming election. “We’re starting now,” she said, emphasizing the need to get individuals to walk their neighborhood, make phone calls, stamp emvelopes, put up yard signs, and talk to friends.

After Senator Cegavske updated attendees on the state’s redistricting status, Kathleen Matson, first vice president of the club, introduced the main speaker, Mark Amodei. He provided information about his background and credentials to represent CD2, and he also answered questions from the audience about his stances on passt legislative votes, the debt ceiling, and how he would work to make Nevada’s voice heard in Washington.