Gingrich: Duplicity in Fact and Fiction 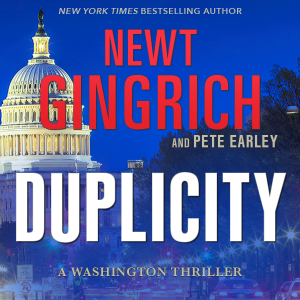 (Newt Gingrich) – Back in June 2013, when Pete Earley, Joe Desantis and I began considering writing a novel about terrorism and a presidential campaign, we could not have imagined how much fact and fiction would blend together.

Twenty-eight months ago we had no idea that our novel, Duplicity, would come out in the very same month that a presidential candidate and former senior government official would be testifying before Congress about issues of deception and dishonesty involving terrorism, the killing of Americans, and the American government deliberately misleading the public during a presidential election.

We started writing before ISIS was in the news every day and before the arrests in Minneapolis of several Somali-Americans for terrorism. Both of these developments have clear analogs in our story.

We were not prescient enough to include a private email server, thousands of deleted emails, and a disregard for national security laws verging on the outrageous. But we did have high-ranking government officials attempting to withhold information from Congressional oversight. (Readers will have to find out how far the fictional officials are willing to go…)

We did include a private contractor manipulating government systems in a disastrous way. But in all fairness to Sidney Blumenthal, our fictional contractor is meaner, more directly destructive and more conniving. Of course, we may want to revisit that judgment after all of the hearings are done.

Our novel, Duplicity, was based on three very simple observations about the world.

First, terrorism is a worldwide phenomenon and much more purposeful and technologically advanced than we give it credit for. One of the key terrorists in our novel is an American who has rejected Western civilization in favor of the radical Islamist effort to impose an alternative system of belief by force and terror tactics.

Second, there are millions of American Muslims who embrace our values and are deeply patriotic. One character in Duplicity is a Somali American who is running for Congress in Minneapolis while his brother is the number two leader in Al Shabaab in Mogadishu. The tension between the two is like a civil war in a single family.

Third, politicians come under enormous pressure to subordinate national security to political considerations. Duplicity is dedicated in part to the idea that national security is a matter of life and death for the country and for individuals. We need a much higher standard of dealing with the safety of the American people than some of our real-life officials have met.

The events in Duplicity are fiction. But as you watch the Benghazi hearings later this month you may conclude that reality is more devious, twisted, and corrupt than those in our novel.

Both Pete Earley, my co-author, and I are amazed at how much our two years of effort actually fits the dangerous world in which we find ourselves today. You can read one of our chapters for free here.

You may find that reading Duplicity helps you better understand the all-too-real duplicity being exposed by the Benghazi hearings and news reports.