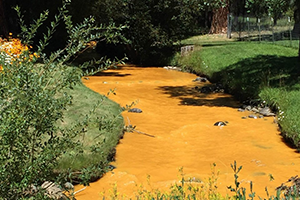 (Newt Gingrich) – For environmental regulators, victories take the form of fines or jail time for the sinners, whose efforts to produce what humans find useful are insufficiently tempered by reverence for “the environment”– an imagined perfection of the world before humans. Those regulators must be tormented this week by the knowledge that in their zeal to defend nature they have turned a Colorado river “an opaque orange color reminiscent of boxed mac and cheese.”

Inspecting a closed-down gold mine in Colorado, an EPA team accidentally spilled 3 million gallons of toxic wastewater into the Animas River. Now the orange plume extends more than 100 miles downriver and the agency is warning people to stay away.

“The magnitude of it, you can’t even describe it,” New Mexico Governor Susana Martinez told a television station in her state, which is downstream of the spill. “It’s like when I flew over the fires, your mind sees something it’s not ready or adjusted to see.”

The EPA brought at least 91 criminal prosecutions last year, most for violations with far less impact than the Colorado spill. For instance, when an Ohio man removed 82 garbage bags of insulation containing asbestos from an old factory he was dismantling, he did the removal without properly notifying the local environmental services and “there was not on site a person trained in the provisions of the federal asbestos regulations,” according to the Department of Justice.

It probably won’t surprise you that the EPA did not take the matter lightly. “The Defendant oversaw the illegal removal of large quantities of asbestos-containing materials, which were ultimately dumped in three residential areas in Toledo,” said the Special Agent in Charge of U.S. EPA’s criminal enforcement program in Ohio. “This case should serve notice that U.S. EPA and its partner agencies are prepared to prosecute those who ‘cut corners’ by avoiding the costs of handling or disposing of asbestos properly.”

The man was sentenced to one year in prison.

Several years ago, the Fish and Wildlife Service charged oil companies with crimes under the Migratory Bird Act after a small number of birds were found in wastewater reserve pits in North Dakota. None of the birds were endangered, and the charges were so absurd that the judge threw out the case.

Of course, the EPA brings even more serious charges in cases of real environmental disasters (and appropriately so). British Petroleum executives were charged criminally and settled for billions of dollars after the 2010 oil spill in the Gulf of Mexico.

So who will the EPA be charging with crimes for the disaster it caused in Colorado? And from whose budget (and whose salaries) will the cost of cleanup be paid?

If the agency has its way, no one will be held responsible, and the taxpayers will pay the bill for this “tragedy.” (When regulators make a mistake, of course, it’s a tragedy. When citizens do, it’s an outrage.)

Congress should hold hearings to establish who was responsible for the spill, and should pass legislation giving the administrator the authority to fire them. Then the Justice Department should bring charges. And Congress should insist the EPA find funding for the cleanup within its own budget. Holding the agency financially accountable for its own disaster would go a long way toward reining in a bureaucracy that is out of control.

N&V StaffJuly 25, 2022
Read More
Scroll for more
Tap
Donald Trump, Megyn Kelly & what you missed at the circus
Conservatives must take a stand in support of innovation