Gingrich: It Isn’t the E-Mails, It’s the Corruption; Congress Has to Find All the Facts

Gingrich: It Isn’t the E-Mails, It’s the Corruption; Congress Has to Find All the Facts
N&V Staff 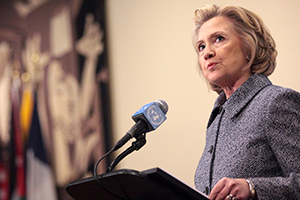 (Newt Gingrich) – Hillary Clinton held her first press conference in years yesterday to address a few of the questions everyone wants to ask about her emails. But the focus on Clinton’s emails misses the larger and more dangerous scandal, of which the private server is only a symptom.

The poorly-defended personal server in her closet, her use of a personal email account for all of her official business, her unilateral decision to erase more than 30,000 emails, her narrow definition of “official” as emails sent to U.S. federal government addresses (when several of her top aides also used personal email accounts) – are all outrageous, yes. But none of these go to the heart of the Clinton scandal.

The key fact is that a former president of the United States and his wife, a U.S. senator, then Secretary of State and always a possible future president, have raised nearly $2 billion dollars–a significant part of it from foreign governments–for their family foundation.

The IRS has investigated churches and Tea Party groups run by grandmothers to determine the extent of their political activities. The FBI has investigated Republican governors for corruption or abuse of office on the most tenuous grounds.

Yet apparently neither has any interest in the $2 billion raised for the personal foundation of America’s most prominent political family.

Who gave the money is one question.

Who got the money is another question.

Whom did they favor with their largesse? What personal business transactions occurred parallel to foundation activities?

You may think that these questions are grasping at straws. But consider Breitbart’s report about Peter Schweizer’s new book, which will be published in May. Schweizer spent a year investigating the Clinton empire. Among his findings, according to Breitbart:

Hillary Rodham Clinton’s brother, Tony Rodham, sat on the board of a self-described mining company that in 2012 received one of only two ‘gold exploitation permits’ from the Haitian government—the first issued in over 50 years.

…VCS’s coveted gold mining exploitation permit was apparently such a sweetheart deal that it outraged the Haitian senate, since royalties to be paid to the Haitian government were only 2.5%, a sum mining experts say is at least half the standard rate.

The State Department directed billions of dollars in aid to Haiti while Hillary was secretary. The Clinton Foundation directed many millions more. Bill Clinton also co-founded the Clinton Bush Haiti Fund which directed an additional half-billion dollars of donations to Haiti. Bill Clinton was also named the U.N. special envoy to Haiti.

It is a surpassing coincidence that Hillary’s brother suddenly decided to enter the mining business in Haiti and that the company on whose board he sat received a very favorable mining deal from the Haitian government.

Schweizer wrote me that this “gold mine is a minor revelation.” He further wrote that the scale of Clinton corruption “is scary stuff.”

Of course, we know that many foreign countries have given the Clinton Foundation millions of dollars directly, including Saudi Arabia, the United Arab Emirates, Qatar, Kuwait, Algeria, Australia, Germany, and Norway, among others. As the San Diego Union-Tribune put it in a recent editorial:

This may be legal, but it reeks. It could not be more obvious that foreign governments are attempting to buy favor with former President Bill Clinton and possible future President Hillary Clinton. The Clintons can’t make the stench go away with their assurances that the de facto bribes were used to help worthy causes.

The House and Senate Judiciary Committees should undertake comprehensive investigations.

We need to know when meetings were held, when money in every form (speech, consulting, book, gift, travel, foundation, campaign) came in, what the various interlocking interests of the donors were, how the money was spent, and what side deals went on between the donors, the beneficiaries and the various members of the Clinton world.

When people can see the chart and timeline (and it will be enormous because raising and spending $2 billion requires a lot of relationships and activities) they will begin to see the scale of dishonesty, self-dealing, and corruption that is sure to be at the heart of the Clinton empire.

In addition to understanding the Clintons, the House and Senate Judiciary Committees need to write new laws updating and enforcing the Constitutional prohibition on foreign governments giving money to federal officials.

This explosion of foreign money into our political system is a dangerous threat to American independence and to the self-government of the American people. It must be investigated and stopped.