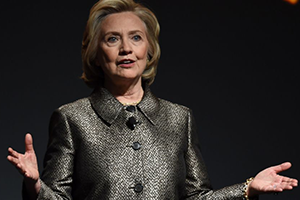 Jorge Ramos says being temporarily ejected from a press conference is worse than the Cuban dictatorship.

Two columnists write about the coming death of the Republican Party. This is a party with its largest state legislative base in history, a majority of the governorships, control of the House and Senate, and more candidates for president than it can get on one stage–yet there are reasons enough for some columnists to believe it is on the verge of dying.

The establishment is beginning to panic and it is going to get worse–a lot worse.

The new Quinnipiac Poll creates a framework for understanding the anxieties of the Washington bipartisan establishment (and it is the bipartisan insiders collectively who are worried).

First, just two percent said they were very satisfied with the way things are going in America. I would like to meet them.

By contrast, 41 percent said they were very dissatisfied with the way things are going. That is a 20-to-1 ratio of very unhappy to very happy.

The overall numbers were 71 percent dissatisfied to 28 percent satisfied. But the really interesting figures were the two “verys”, and there the pressure is overwhelmingly toward dissatisfied.

One out of every four Americans (27 percent) said they were angry with the federal government. Another 49 percent were merely dissatisfied for a total opposition of 76 percent.

Only 2 percent said they trusted their government all the time. This may be the same 2 percent who said they were very satisfied with the way things are going in America.

Neither party’s leadership in Washington can be comfortable with this poll. Republicans had only 12 percent approval while 81 percent disapproved. This may help explain why the traditional Republican candidates are having a difficult time breaking through.

When ISIS is seen as winning the war against our civilization;

when police are being killed for serving in uniform;

when radicals chant about “pigs”;

when the Chinese and Russians hack into millions of federal records;

when the Veterans Administration continues to fail veterans;

when the border remains uncontrolled;

when taxpayer-funded professors impose politically correct language that strikes most Americans as weird;

and on and on, American’s severe disaffection with the status quo begins to show up in polls like these.

In the last two Iowa polls, Donald Trump was at 23 percent. In the first poll, Ben Carson, a doctor, was at 18 percent and in the second he tied Trump. Carly Fiorina jumped from 5 to 10 percent.

Thus in the first poll, 46 percent chose a candidate that has never held elected office. In the second poll, that number jumped to 56 percent.

Now, it’s possible this is all just summer amusement. But it’s perhaps more likely that this is a country so fed up with failed bureaucracies, leaders who don’t seem to listen, and the left-wing effort to browbeat it through political correctness that it is now moving toward a genuine earthquake.

This may be a historic rather than a political election.

If the voters continue to move toward authentic outsiders, you should expect to have the news media, the Washington lobbyist-policy class, and liberal politicians become more and more hysterical.

Having started with terrorists, dictatorship, and Nazis in August, it will be fascinating to see how over-the-top, vicious, and scurrilous the left becomes as the collapse of their world looms closer.