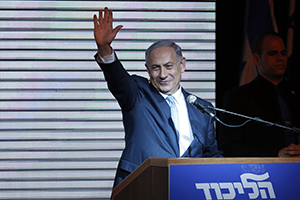 (Newt Gingrich) – Yesterday’s election in Israel is a healthy reminder that the vote of the people matters. It is also a useful reminder that campaigns can make a big difference.

Prime Minister Netanyahu focused his campaign on national security. He argued that Israel’s very survival is at stake. His opponents wanted to emphasize the economy.

Forced to choose between their pocketbook and their lives, a large number of Israelis chose national security.

The bias of the media in this campaign was obvious and deeply anti-Netanyahu. Before election day, there were predictions that Netanyahu’s party, Likud, would only win 21 seats. Then the media decided based on exit polls that the race would be a tie with 24 seats for Likud and 24 for the left.

My guess is that media hostility to Netanyahu caused a significant number of those polled to refuse to admit they voted for him.

In the real results, it seems Likud won 30 seats for a surprisingly big gain in the complex world of Israeli politics. As the New York Post reported, “Not only was that shockingly good for Likud, it was a far stronger showing than in the last election.”

If Netanyahu was the biggest winner of the day, Speaker John Boehner may have been the second biggest winner. His decision to invite the Israeli Prime Minister to address a joint meeting of Congress created a close tie with the newly reelected Israeli leader.

President Obama has publicly expressed disdain for Netanyahu and sent political operatives (not to mention, according to some allegations, taxpayer money) to defeat Likud. He lost.

This outcome is a good reminder that elections matter. The real vote was very different from the pre-election analysis which was off by 45% in the number of seats won. It was also “a far cry from the virtual dead heat that television exit polls had reported Tuesday evening,” as the Jerusalem Post put it.

Prime Minister Margaret Thatcher used to say, “First you win the argument, then you win the vote.”

This outcome has to worry Hillary Clinton, who saw Barack Obama win the 2007-2008 primary campaign even though she was far-and-away the frontrunner, in part because she had no argument to make. She seems to have the same problem today.

Republicans should take heart that a sound campaign that makes an important argument can lead to a good election outcome.