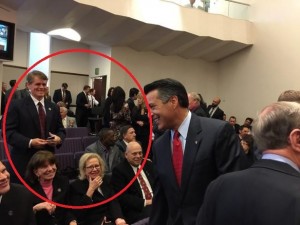 But instead of legislative Republicans declaring it dead on arrival, Nevada’s #2 liberal blogger-with-a-taxpayer-subsidized-TV-show, Jon Ralston, reports that a GOP alternative will be presented in the Republican-controlled state Assembly next Monday.

“Assembly Republicans have crafted a tax plan that is a hybrid of the business license fee component used by the governor and an expansion of the payroll tax plan sought by some business types, sources confirm.  The plan is expected to drop Monday, the deadline for committee bill introductions.”

Please ignore the fact that Mr. Ralston apparently doesn’t know how to spell “license” or “governor.”  The outrageous thing is that the Assembly GOP’s alternative plan “fully funds the governor’s budget.”

Meanwhile, it’s Democrats in the Legislature who are proposing to kill the asinine Modified Business Tax that taxes businesses for hiring employees.

Is this some kind of sick joke?

And let’s start being honest about this tax hike, shall we?

Almost half of SandRINOval’s tax hike will come from a new gross receipts tax that he’s calling a “Business License Fee.”

Which according to some Republicans isn’t really a tax hike because they’re calling it a “fee” and you can avoid the fee simply by, you know, not opening a business.

Anyway, I had lunch with a friend today and let him know that his current annual business license fee of $200 would jump to over $11,000.  But he wasn’t worried and had no objection.

He said he’s just going to pass the expense on to consumers!

And believe you me, he ain’t the only one.

The fact of the matter is, businesses aren’t going to pay these higher taxes…er, excuse me…fees.

They’re gonna pass them on to you and me in the form of higher prices.

Or close up shop and put a lot of you out of work.

Our Republican-in-name-only governor is screwing YOU.

Republicans in the state Senate are screwing YOU.

Republicans in the state Assembly are screwing YOU.

Are you tired of constantly being screwed yet?

This is why it’s not enough to just elect more Republicans.

We need to elect BETTER ones, as well.

In the meantime, break out the pitchforks and light the torches!

“If they approve the new business tax, I’m closing my doors and letting my five employees go.  With all the employee taxes, insurances, my 300% increase in health ins premium, EPA, State Fire Marshal, DMV, etc., etc., and chiseling insurance companies, we are tapped out.  What is he (Sandoval) thinking?” –  Deb Bonetti, Last Chance Auto Body, Elko

Mr. Muth is the president of Citizen Outreach, a conservative grassroots advocacy organization. He can be reached at www.MuthsTruths.com.