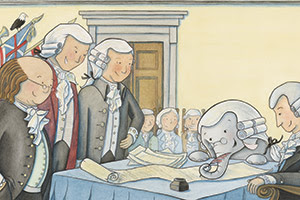 (Newt Gingrich) – It was 239 years ago this week that 56 men pledged “their lives, their fortunes, and their sacred honor” for the freedom of a new nation, signing a document that might have been their death sentence, the Declaration of Independence.

Their act of courage, like that of the patriots at Concord a year earlier, reverberated around the world. Their words did, too, expressing the cause of the Revolution (and of many revolutions to follow) with a clarity that no one has ever matched.

“We hold these truths to be self-evident,” they wrote: “that all men are created equal, that they are endowed by their Creator with certain unalienable rights, that among these are life, liberty, and the pursuit of happiness.”

With these words on that hot summer day in Philadelphia, the Founding Fathers changed the course of human history. The United States became the first country on earth to be established on fundamental principles of freedom. And for more than two centuries, our nation has continued to be defined by these big ideas. They are the basis of our system of government, the subject of our political debates, and at the heart of what makes America exceptional.

Most Americans still understand these timeless ideals. In 2010, a Gallup survey asked respondents, “Because of the United States’ history and its Constitution, do you think the U.S. has a unique character that makes it the greatest country in the world?” 80 percent of all Americans affirmed their belief in America as an exceptional nation, including 91 percent of Republicans, 77 percent of Independents, and 73 percent of Democrats.

Unfortunately, we are failing to pass on our appreciation for America to the next generation of Americans. A recent Pew Research Center survey found that only 34 percent of people between the ages of 18 and 34 say they believe America is the greatest country in the world.

The problem begins in many of our schools. Our students are failing to learn American history–and without understanding our country’s past, they can’t possibly understand what makes America an exceptional nation.

For two generations now, we have taught our children revisionist or politically correct history–like the strange idea that our Founding Fathers risked their lives out of greed or self-interest, or that they intended our interpretation of the Constitution to “evolve” over time. As a result of this failure to teach the truth about our history, we are beginning to see our nation’s memory of the past slip away–especially the values and principles for which our founders actually fought.

Only one in three fourth-graders can identify the purpose of the Declaration of Independence that we celebrate this week. Less than half understand why George Washington was an important leader in American history. And most fourth-graders don’t know why the Pilgrims left England.

These are alarming findings. It seems we are doing a poor job of helping the next generation understand both our amazing history and the great privilege of being American.

Those of us who are proud of our country and committed to passing on the lessons of its past must find creative ways to tell the American story.

Children’s books can be a good way to introduce young people to American history. As the author of four children’s history books (including Yankee Doodle Dandy, about the American Revolution), I have visited classrooms across the country to share the adventures of Ellis the Elephant, my time traveling pachyderm, with four to eight year olds. Most young people I meet are eager to learn and are excited to discover our nation’s pivotal moments.

The need to share our nation’s history with the next generation is also why Newt and I are hard at work onWhy George Washington Matters, a documentary film and social media campaign that will help young people understand the significance of the Father of Our Country.

Interactive online courses, television programs like Liberty’s Kids, and educational games like Oregon Trail can also teach critical history lessons. And of course, visits to historic sites like George Washington’s home at Mount Vernon or Independence Hall in Philadelphia are wonderful ways to inspire a love for American history.

This Independence Day, take a moment to appreciate the courage and sacrifice of those who signed the Declaration of Independence–the youngest just 26 years old. And then, take the opportunity to share with the young Americans in your life the meaning of this extraordinary document.