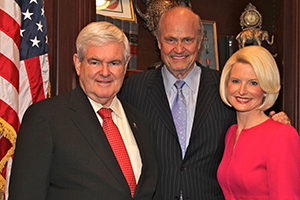 Fred Thompson (center) will be deeply missed for being a good servant to his fellow Americans.

(Newt Gingrich) – Callista and I are deeply saddened by the passing of Senator Fred Thompson. Our hearts go out to his wife Jeri and their family.

Fred was much more than a United States Senator.

He was a big man. At six feet, six inches tall, he towered over the room and had a powerful, deep voice to match his physical stature.

My favorite memory of Fred was his role as the Admiral Josh Painter in the Hunt for Red October. I was deeply impressed by the way he said: “This business will get out of control. It will get out of control and we’ll be lucky to live through it.” He made it sound authoritative and definitive and he looked the part perfectly.

I once asked Fred if he was channeling some famous admiral when he played that role. “Nah,” he said. “I was thinking of my grandfather and how he talked. Now HE was an authority figure.”

Fred had a remarkable career as a citizen. He was the first member of his family to go to college and did well enough as a student to graduate from Vanderbilt Law School. When he passed the bar, he shortened his name from Freddie to Fred.

As a young lawyer, he worked as a deputy U.S. Attorney locking up bank robbers and other criminals.

After three years, Fred left the practice of law to run Howard Baker’s reelection campaign in 1972. That step would change his life.

A year later, Baker asked Thompson to become the top Republican counsel for the Senate Watergate committee. It was actually Fred who asked Alexander Butterfield the key question about the taping system. With that one question, President Richard Nixon’s future was sealed and his resignation was only a matter of time.

After Watergate, Fred went back to the practice of law. In 1977 he accepted a case involving massive corruption in the Tennessee governor’s office. That case changed Thompson’s future decisively. Hollywood decided the governor’s corruption would make a good movie. As the film’s producers were looking for someone to play the crusading lawyer, they decided Thompson was the best person to play himself.

Having successfully acted that part in the 1985 movie Marie, Thompson then went on to play the CIA director in Kevin Costner’s No Way Out, the airport manager in Bruce Willis’s Die Hard 2, and the admiral I mentioned in Sean Connery’s The Hunt For Red October. In total, Fred played roles in 40 films as well as enjoying a long run as a district attorney in Law and Order.

Fred was drawn back into politics when Al Gore left the Senate to become vice president in 1993. Fred won his U.S. Senate seat in 1994 riding around the state in a red pickup truck. Imagine this Vanderbilt lawyer, Watergate counsel, successful attorney, and Hollywood actor riding around in a red pick up truck and you have some idea of the power of his personality.

Thompson was a good senator, a credible presidential candidate in 2008, a real asset to the American Enterprise Institute as a scholar, and a deeply committed husband, father and grandfather.

Fred represented the best in the American tradition. He was a citizen before he was a politician. He cared about his country and voted the way he believed. Because he was not a career politician, he could vote and speak as his conscience. Fred was impossible to intimidate because he knew he could earn a living without a vote and he knew there were a lot of things in life more important than being a senator.

In a very real sense, Fred was the classic American whose independence was grounded in a willingness to work and take risks. He called them as he saw them.

We didn’t always agree but we always respected the integrity and independence within which each of us operated.

When Fred endorsed my presidential campaign in 2012, it was a high honor and one which Callista and I will always cherish.

Fred Thompson was an American original. He will be deeply missed.

Our prayers go out to his family.