(Newt Gingrich) – 228-199. 392-37. These two sets of numbers indicate why historians may look back on this as the week Speaker Boehner really began to run the House. 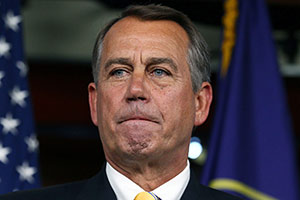 The first numbers, 228-199, were the final vote on passing the budget. This was a vital step because the budget leads to reconciliation. Reconciliation is the ONLY legislative vehicle that can pass the Senate on a simple majority. If Republicans are to send a bill repealing Obamacare to President Obama’s desk, they have to use reconciliation. Otherwise, a regular bill takes 60 votes to pass the Senate. It is obvious that with only 54 Senate Republicans there is no way for them to use the regular procedure.

A week ago observers had suggested that Boehner could never get 218 Republicans to stick together. There was a large block of conservatives who sounded as if they would oppose everything. With help from a conservative leader, Congressman Jim Jordan of Ohio, Boehner developed a plan which enabled conservatives to vote for their budget and then vote for final passage of the budget proposed by Chairman Tom Price of Georgia.

The House leaders allowed six different budgets to be offered so the Democratic liberals, the Black Caucus, and conservative Republicans could all have a chance to present their versions. That enabled many conservatives to vote for more aggressive spending cuts and then vote for final passage of the House GOP Budget. That was a huge victory for Boehner which no one expected a week ago.

The second set of numbers, 392-37, was the startlingly large majority for a genuinely bipartisan combination of fixing doctor and hospital payments and reforming Medicare.

This reform was cosponsored by Democratic Leader Nancy Pelosi in a surprisingly solid bipartisan effort. In part, that bipartisanship was driven by the intense pressure of doctors and hospitals who were desperate to end the annual chaos of trying to fix what was clearly a mistake in the Medicare Law.

Congressman Mike Burgess of Texas, himself a doctor, had led the fight to get a permanent fix to the payment problem. It was a big victory for his perseverance and determination.

In the same bill, the House Republicans got the first serious reform of the Medicare entitlement in 19 years (since 1996). The Democrats had always insisted on a tax increase as their price for any entitlement reform. Under firm pressure from Speaker Boehner, they dropped that demand and the reforms passed with no tax increase. It was a substantial victory for Speaker Boehner and for conservatives.