Gingrich: The Collapse of Baltimore City 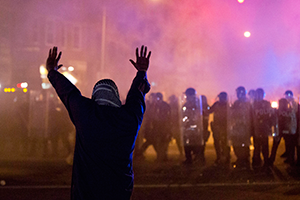 That is 73 years of solid Democrat city councils.

That is 48 years of unbroken control of the mayor’s office.

Fact: the Maryland Senate is currently 33 Democrats to 14 Republicans.

Fact: the Maryland House is currently 90 Democrats to 50 Republicans.

Fact: the last time Republicans held even one chamber of the Maryland General Assembly–the House–was 1917.

Fact: 7 out of 8 members of the Maryland delegation in the U.S. House are Democrats.

Fact: Last Republican U.S. Senator from Maryland was elected in 1980.

Fact: it was Baltimore’s Democrat mayor, Stephanie Rawlings-Blake, who said:

“I’ve made it very clear that I work with the police and instructed them to do everything that they could to make sure that the protesters were able to exercise their right to free speech. It’s a very delicate balancing act. Because while we tried to make sure that they were protected from the cars and other things that were going on, we also gave those who wished to destroy space to do that as well. And we worked very hard to keep that balance and to put ourselves in the best position to de-escalate.”

This “space to destroy” policy led to riots which resulted in:

The collapse of order has a continuing effect. There has been a drastic increase in shootings and homicides in Baltimore since April 27. More than 50 people have been shot. At least 10 have been shot and four killed since Saturday May 9. Nonfatal shootings are up nearly 50 percent.

All of this happened under the leadership of a Democrat mayor who was worried more about the rioters’ free speech than about the safety, protection, and livelihoods of innocent Baltimoreans.

The first duty of government is to protect the innocent and the weak from predators and violence.

Once again a Democrat favored the violent over the victims.

The protesters charge that the police are racist.

Fact: More than half of the Baltimore City police force is minority.

Fact: four of the six top commanders are African American or Hispanic.

Fact: half of the police officers being prosecuted are African American.

The protesters point to poverty–and they’re right. Poverty has devastated minority communities. But it is left-wing policies implemented by Democrats that have created destructive incentives and denied opportunity to generations of young people.

As Terence Jeffrey of CNS News quotes a lawyer for Freddie Gray’s family as saying, “The education system has failed them.” The lawyer is right. “These kids have had bad experiences in school,” he said.

For $17,000 a year, Baltimore City students could get much better educations at Catholic schools, private schools or even with an organized home schooling program (8 students could pool $120,000 a year to hire a personal tutor as was done when Thomas Jefferson was young).

Amazingly, as Archbishop of Baltimore William Lori points out, the Catholic schools cost $6,000 a year and have a 99 percent graduation rate. Yet the Democrats are committed to locking poor children out of those schools if it takes a dime away from funds for failing, unionized public schools.

With school choice policies, we could save children’s lives while saving money. Instead the left wing unions and bureaucracies ruthlessly exploit children, ruining their lives while the Democratic leadership in the Maryland House blocks school choice bills that would give children a chance to attend better schools and would force schools to compete for students by actually being good schools.

There is no greater example of the relentless dishonesty of modern Democrats than their willingness to destroy children’s lives while blaming others. President Obama could quit blaming Fox News and simply demand school choice (which of course he opposes) and he would radically improve the lives of millions of trapped poor children.

Of course, it is Democrats who control the teachers union that traps Baltimore City’s children in schools that fail and ruin their lives. They do so on behalf of the unionized bureaucratic political machine that controls the city.

Poverty in general has been institutionalized by the destructive ideological biases of Democrat President Lyndon Johnson’s Great Society. On May 22,1964 President Johnson said, “Our society will never be great until our cities are great. Today the frontier of imagination and innovation is inside those cities and not beyond their borders.”

Tragically, his policies trapped people in dependency, killed small businesses in favor of bureaucracy, and favored unionized workers over children. The result has been a 50-year disaster which no liberal Democrat is prepared to analyze honestly.

Charles Murray’s classic study of destructive welfare policies, Losing Ground, and Marvin Olasky’s decisive repudiation of the idealistic premises of big government liberalism’s approach to poverty, The Tragedy of American Compassion, explain decisively the failure of the Baltimore City Democrats. Their values, principles and organizations doom their efforts to failure.

A sound program has to start with safety and work.

That policy has to begin with favoring public safety and small business.

All Americans should care enough about their fellow citizens trapped with bad leadership, bad government, selfish bureaucrats, and misleading news media. All of us should care about creating a much better future for poor Americans.

That future has to start with a fact-based analysis of how we got here and who has been responsible.

In Baltimore City, the answer is Democrat officials who for a half-century have crippled and weakened what was once a great and vibrant city.

In future weeks, I will outline a strategy for a renaissance in Baltimore City.